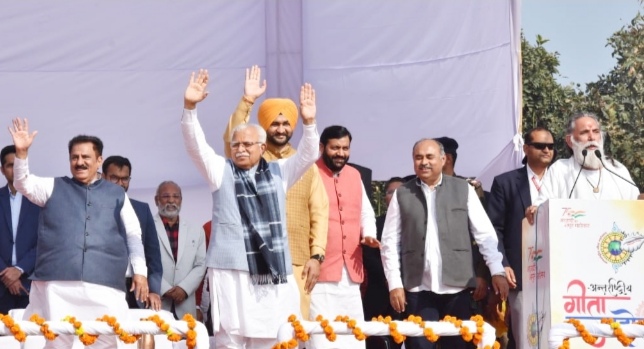 Our ancient education system was better than the present one : CM Manohar Lal

Our Vedic science needs to be brought to the frontline: CM Manohar Lal

Chandigarh, December 4- Haryana Chief Minister Sh Manohar Lal today the time has come when we should move forward to promote the knowledge of Vedic science and link the old educational techniques and methods with the new ones.

In his inaugural address, Sh. Manohar Lal said that the age-old belief about foreign forces trying to break and destroy our Vedic science and knowledge of Vedas before India’s independence was still around.

“We have taken many important steps on the subject of Vedas, including setting up a research center, purchasing land for Veda University, starting Sanskrit University in Kaithal after the name of Maharishi Valmiki, starting Gurukul in Mata Mansa Devi temple premises and establishing Sanskrit College, etc,” said Sh. Manohar Lal.

He said that efforts were on to get Vedas and ancient knowledg again into the mainstream.

Sh. Manohar Lal said that the late Sh. Ashok Singhal had an important contribution to changing the direction of his life.

The Chief Minister further shared that the late Singhal was the Pranth Pracharak of the Sangh for Haryana from 1977 to 1981, at the same time in 1977, he had become a volunteer of the Sangh because of the emergency.

“Had it not been an emergency, then I might not have been able to join the Sangh. At that time, due to the pain of emergency or curiosity, many people came closer to the Sangh and the organization got strengthened,” said Sh. Manohar Lal.

The Chief Minister further shared that whenever he had questions arising in his mind while visiting the branches of the Sangh, he used to meet Late, Sh. Ashok Singhal to get the answers to his queries.

He said that Late Sh. Ashok Singhal was a very educated person who devoted his entire life to the Sangh and his life was like that of an ascetic.

Interestingly, the Chier Minister made this seminar more of an interactive session than of speech based as during the seminar he called upon the scholars present in the seminar to find a solution to the doubts he has shared with them.

Students are the future of Punjab, Will spearhead…