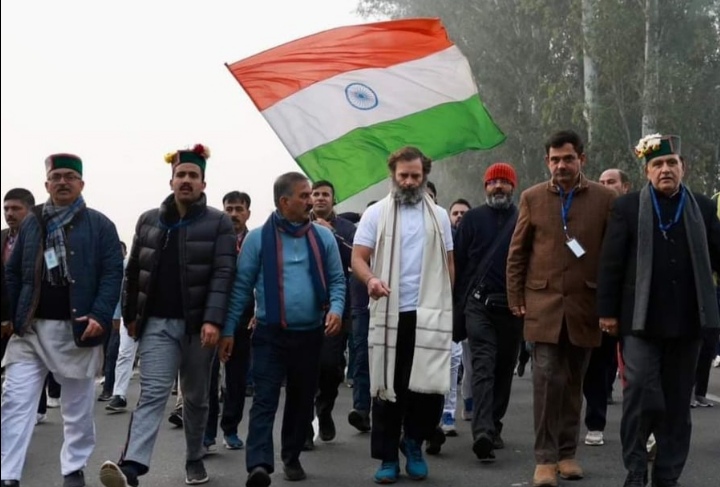 Rousing reception given to Rahul’s Bharat Jodo Yatra in Himachal

Rousing reception given to Rahul’s Bharat Jodo Yatra in Himachal

• Yatra aims to unite nation against communal and divisive forces: Rahul Gandhi
• Learning immensely from Rahul Gandhi’s  march for uniting nation:  CM
Dharamshala (Arvind Sharma)18/1/23
Bharat Jodo Yatra of Senior Congress Leader Rahul Gandhi entered Manser in Kangra district today at 7 AM before heading towards its last leg of Kashmir. On his arrival, he was accorded a warm welcome by the Chief Minister Sukhvinder Singh Sukhu and other senior leaders of Congress party. After entering Himachal at the border village of Ghatota,  the Punjab State Congress President, Raja Warring handed over the Tricolour to the Chief Minister Sukhvinder Singh Sukhu and State Congress President, Pratibha Singh in presence of Rahul Gandhi.
This 24 kilometre Yatra starting from Manser Toll Plaza will converge at Malout Village in Indora area of Kangra district and is scheduled to enter Jammu and Kashmir State on 19th January, 2023. Thousands of people and supporters from the State welcomed Rahul Gandhi and participated enthusiastically in the Yatra. 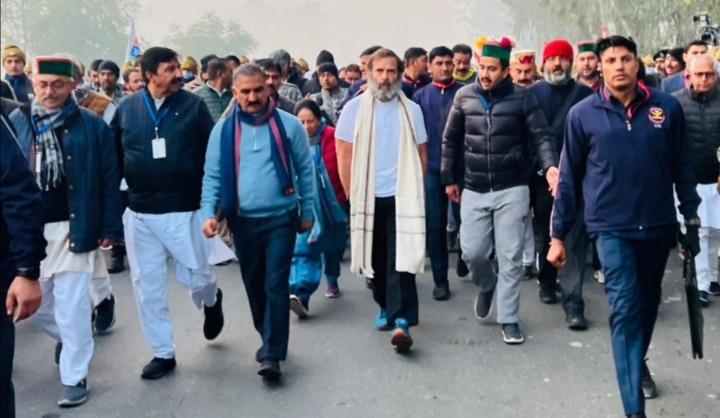 The Congress leader Rahul Gandhi is orchestrating the movement by mobilising the party workers and general public on foot from Kanyakumari to Kashmir, spanning 3,570 kms. The march, which started from Kanyakumari in Tamil Nadu on 7th September, 2022 will conclude in Srinagar by 30th January, 2023 with hoisting of the national flag, on the .
While addressing the gathering at Manser, Rahul Gandhi said that the Bharat Jodo Yatra was aimed at uniting the Nation against the communal and divisive forces and to give a befitting reply to the nefarious designs of the BJP and the RSS. ‘My aim is to unite the people and the nation against anti people policies of Bharatiya Janta Party’, said Sh. Gandhi.
Senior Congress leader said that the BJP completely failed to address the unemployment and inflation issues and involved itself in nepotism by providing benefits to its favourites. Nothing has been done for the youth and common masses as all the decisions of the BJP such as demonetization, wrong implementation of GST etc. was aimed at benefitting their high profile business friends, he added.
Rahul Gandhi said that he has received immense response from the general public during this Yatra and has also learnt a lot from the people of ‘Bharat’. On the request of the Himachal leadership, he has made a few changes in his Yatra’s route so that he could also cover Himachal Pradesh on his way to Kashmir.
Chief Minister, Sukhvinder Singh Sukhu while welcoming the Congress leader Rahul Gandhi said that the massive victory of the Congress was in fact the victory of truth over corruption and the credit goes to the dedication and hard work of Rahul and Priyanka Gandhi. He said that Himachal Pradesh would also follow the path of unity, integrity and coexistence shown by the Congress party by launching ‘Hath se Hath Jodo campaign’.  He thanked the Congress leader for changing his itinerary on the request of the Himachal congress.
MP and State Congress President, Pratibha Singh while welcoming Rahul Gandhi, assured him that the State Government and the Party would implement all the ten guarantees of the Congress as promised in its ‘Pratigya Patra’. She said that the State Government has already announced Old Pension Scheme (OPS) for its employees in its very first Cabinet meeting and promises like providing Rs. 1500 to women in age group of 18 to 60 years would be implemented soon.
Later, Rahul Gandhi along with Chief Minister Sukhvinder Singh Sukhu, Deputy CM Mukesh Agnihotri, State Congress President Pratibha Singh and other dignitaries visited the historic Shiva Temple at Kathgarh and paid the obeisance.
Congress Incharge, Rajiv Shukla, Co-Incharge Sanjay Dutt, Deputy Chief Minister, Mukesh Agnihotri, Speaker Kuldeep Pathania, Ministers Dr. Col. Dhani Ram Shandil,  Chander Kumar, Harshwardhan Chauhan, Jagat Singh Negi, Rohit Thakur, Anirudh Singh and Vikramaditya Singh, MLAs, other senior Congress leaders and dignitaries, besides Congress workers in large number  also participated in the Yatra.