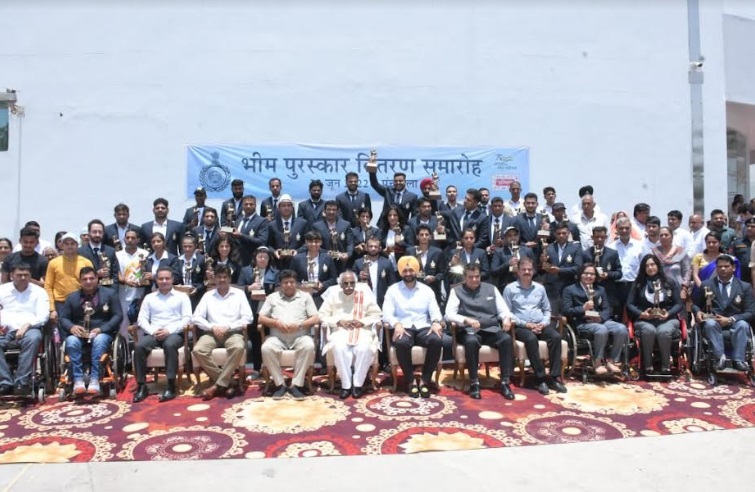 Rs. 5 lakh given as cash award

Haryana increased the diet allowance to Rs. 400; highest in the country

Chandigarh, June 23 – Haryana Governor, Sh. Bandaru Dattatraya conferred Bhim Awards to 52 players of Haryana for their outstanding achievements in sports. Each Awardee was given Rs. 5 lakh as cash award along with Bhim Statue, tie, blazer and citations. They will also be given Rs. 5000 per month as honorarium. The Bhim Award Felicitation ceremony was organised on the occasion of International Olympic Day at Indradhanush Auditorium, Panchkula.

While addressing the gathering, Sh. Bandaru Dattatraya said that today Haryana has made an indelible mark in the field of sports. He added that due to outstanding Sports Policy of Haryana and international standard of sports infrastructure, players of Haryana are bringing glory to the country at International and National Sports Events. He added that other governments are also looking forward to replicating our sports policy in their state. He further added that Haryana has emerged as overall Champion by clinching 137 medals in Khelo India Youth Games-2021 which is a matter of pride for us. Not just this 190 sportspersons have been offered Government jobs in Group A, B, C and D so far.

While speaking on the occasion, Sh. Sandeep Singh first extended warm wishes to everyone on the occasion of International Olympic Day. He said that an award plays a major part in the players’ lives as they are motivated to perform better in future games and also get recognition for their hard work in society. He added that previously awards were distributed on political recommendation but now the present Government has ensured that awards are given in completely transparent manner. He added that while nominating a candidate we invite objections, if any, on digital platform so that complete transparency is ensured. He informed that in Khelo India Youth Games-2021, total 12 new records were set, out of which 11 records were made by players of Haryana. He further said that Haryana Government supports its players in every manner even during their tough phase of injury. He said that Government has decided to open four Sports Rehabilitation Centres in the state which will be equipped with facilities matching international standards.

The Minister further said that the State Government has increased the diet allowance to Rs. 400 which is the highest in the country. To further enhance the stature of sports in the state, 1100 Sports Nurseries have been set up.

While speaking on the occasion, Haryana Chief Secretary, Sh. Sanjeev Kaushal appreciated the stellar performances of players in the Khelo India Youth Games and said that the players were able to give a tough fight to state teams of Maharashtra and Karnataka who have always dominated the national games. He added that state of the art infrastructure is attracting the youth towards sports. Haryana Government ensures that these players have a sense of security that the government is there to support them in every way so that they do not have to worry about their future.