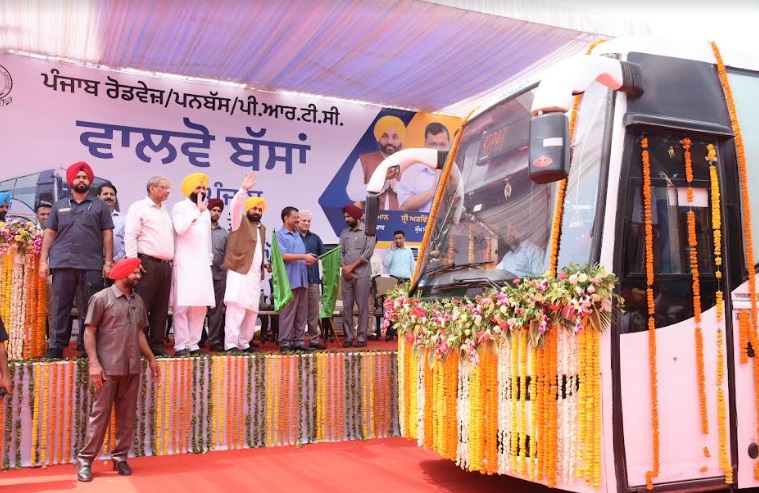 CM DESCRIBES IT AS REVOLUTIONARY STEP TO CURB TRANSPORT MAFIA

“This is a historic occasion when the Punjab government has fulfilled its promise with the people by ending monopoly of the private transporters and introducing cheap and luxury travel to IGI airport in merely Rs 1170 thereby stopping loot of people”, said the Chief Minister while addressing the gathering.

The Chief Minister said that daily seven Volvo buses will ply from Jalandhar bus stand to Delhi airport. Likewise, he said that similar buses will also move from Amritsar, Pathankot, Ludhiana, Hoshiarpur, Kapurthala, Patiala and even from Chandigarh daily to the airport for facilitating the passengers. Bhagwant Mann said that with the plying of these buses the passengers will get a comfortable, luxurious and cheap travel to airport at a meagre price.

The Chief Minister said that passengers desirous of going to airport can get the online booking done prior to three months of travel whereas the tickets can be booked at the counters of bus stand six months ahead of the journey. Bhagwant Mann said that his government has got the mandate of people to serve the state by eliminating mafia. He said that will the rolling of these buses now transport mafia will also be a thing of past.

The Chief Minister bemoaned that for decades only private transporters had run their buses on this route and looted the people by charging impulsively. Squarely blaming the successive Congress and Akali governments for not plying government buses to airport, he said that vested interests of these leaders prohibited them from doing so. Bhagwant Mann said that the transporter leaders of both these parties minted the money illegally by not allowing government buses to operate on this route.

The Chief Minister said that these leaders plundered people’s money mercilessly as former Chief Ministers, Ministers or MLAs flexed their muscles for enhancing fleet of their buses rather than facilitating the people. Bhagwant Mann said that government’s might was used not for well being of public but for promoting transport mafia. He said that these people monopolised the trade and exploited the people.

The Chief Minister said that his government will take every initiative to safeguard the interests of Punjabis and eliminate all sort of mafia or monopolisation from the state. Bhagwant Mann said that number of NRIs who came to Punjab from abroad had always complained him that why only private players have the right to ply buses on this route and why not government buses are running on them. He said that now sounding death knell for transport mafia, Punjab government will run these super luxurious buses that will charge less than half of private transporters and give double facilities than them. Bhagwant Mann also thanked the Delhi government especially the Chief Minister Arvind Kejriwal for extending fulsome support and cooperation to them for this noble cause.

In his address, Delhi Chief Minister Arvind Kejriwal vowed to make Punjab a gangster free land. He said that gangster culture was nurtured by the Akalis and Congress who openly patronised these criminals. Arvind Kejriwal said that now when patronisations of these gangsters have ended they will be soon behind the bars.

The Delhi Chief Minister said that it was a significant day for Punjab as the Volvo buses started departing to IGI Airport. He said that this facility would be smoother and beneficial especially for the Punjabi Diaspora. He said that the AAP‘s Government is an honest one, which has been working in a transparent manner thus paving a way for implementation of pro-people initiatives.

The Chief Minister said that Punjab’s AAP Government started a campaign against illegal possessions on Panchayati lands which led to removal of such possessions on 5500 acres of land. He also announced that the services of more than 26,000 contractual employees would be regularised as the Punjab Government is set to enact a law in the ensuing session. He also stressed that the mafia was being dealing with iron hand as the State Government had a zero tolerance in this regard.

The Delhi Chief Minister said that Punjab Government will not spare any guilty of crimes committed anywhere in the state since the previous Governments were patronising such anti-social elements, said Kejriwal adding that the nexus of gangsters would be wiped out. He said that special efforts were being made to ensure discipline amongst the inmates of jails besides trashing the VIP treatment inside jail premises. Arvind Kejriwal said that a new era of unproven development and growth is being witnessed in three months of formation of AAP government.

Punjab Transport Minister Laljeet Singh Bhullar termed the day a historic as the efforts of Chief Ministers of Punjab and Delhi to start this service which would facilitate to lakhs of NRIs of Punjab. He said that this endeavour of Punjab Government would end the monopoly of private players.

Addressing on the occasion, Delhi Transport Minister Kailash Gehlot said that now the buses from Punjab would depart for IGI Airport New Delhi benefitting the people across the state and of foreign shores. He said that the AAP Government had started this volvo bus service within three months after taking over in the state. He also clarified that the Volvo buses of Punjab Roadways, Punbus and PRTC would arrive directly at the airport terminals.