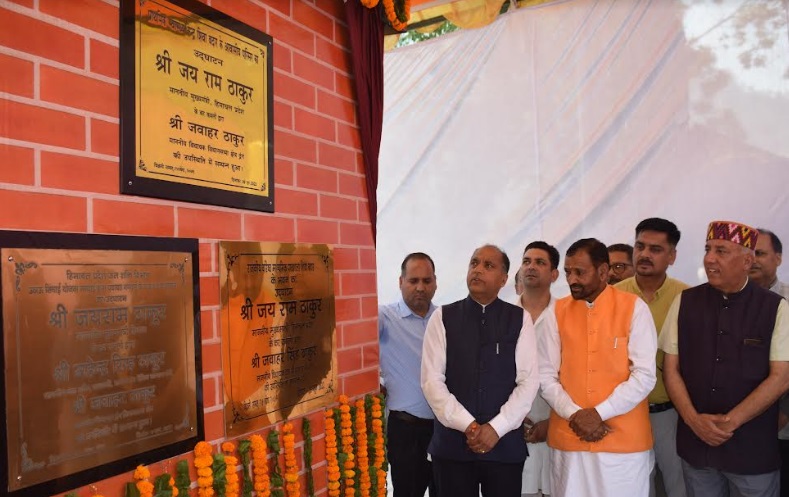 BJP would again form the government in the assembly elections: Jairam Thakur

Pandoh is the center of 25 panchayats of four assembly constituencies viz. Drang, Seraj, Nachan and Sadar Mandi. With the opening of the college, about 36 thousand people in general and particularly about 2 thousand students of 15 Government Senior Secondary Schools located in these panchayats would be benefited.

Jai Ram Thakur directed to submit the feasibility report on the demand of opening Junior Engineer (JE) section of Public Works at Balh-Tikkar of Chauhar valley.

Jai Ram Thakur said that the State Government has worked with the aim of all round development of each and every area of the State. He said that in the last four and a half years, new dimensions of progress have been established in the Drang area. Under Mukhyamantri Grihini Suvidha Yojna about 8 thousand women of the area have been benefited. He said that more than 4700 new cases of social security pension have been approved in Drang assembly constituency. About 10 thousand 186 farmers are getting benefits under the Pradhan Mantri Kisan Samman Nidhi Yojana, he added.

Chief Minister said that Rs. 25 crore have been spent on the improvement of Ghatasani-Barot road and Rs. 7 crore on strengthening of Katindi-Kashla road. He said that Rs. 16.30 crore Panjori Nala drinking water scheme has been dedicated to the people of the area. The Divisional Office of the Public Works Department has been opened at Thalot. With many such public welfare steps, work has been done to bring happiness in the lives of the people of Drang Assembly Constituency.

Jai Ram Thakur said that there has been a lot of turmoil in the Congress party across the country. There is an uncertainty among the leaders and many popular leaders are leaving the Congress, because they feel that their hard work of the past many years was of no value in today’s Congress. He chuckled and said that many Congressmen are narrating their woes to him. It is said that there was a rule of mother and son in Delhi in Congress, now the same situation was prevailing in the state as well.

Jai Ram Thakur said that in the state, the Congress party has made four working presidents, although they have no power in their name. The Chief Minister said that many Congress leaders are under the illusion that their ‘turn’ would come in Himachal. The assembly elections held in different states of the country have proved that the custom of this turn has now been changed. With this changed custom, in Himachal as well BJP would again form the government in the assembly elections to be held later this year, he added.

MLA Drang Jawahar Thakur while expressing his gratitude for various developmental projects said that today Drang Assembly Constituency was second to none in development with the blessings of the Chief Minister. Road connectivity, electricity, water supply, infrastructural development of schools and health institutions has been ensured in the area. He said that it has been ensured that the people get full benefits of all the welfare schemes. Works on 44 roads under various schemes, drinking water and irrigation schemes have been completed and many works were under progress. He said that the people of the area were close to the heart of the Chief Minister and people also decided to extend their wholehearted support to him.