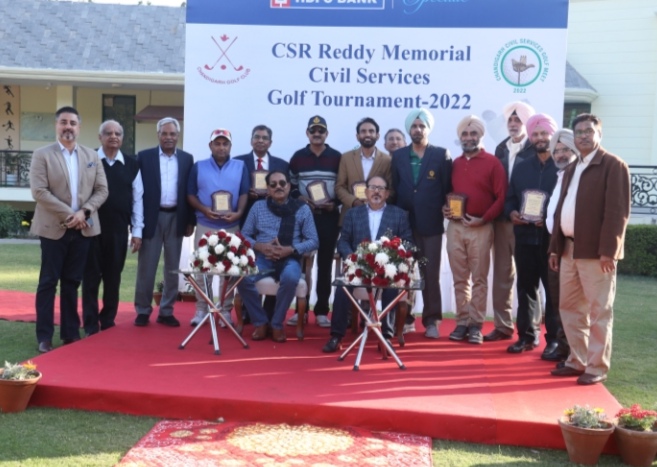 Chandigarh, December 13, 2022 (Kulbir Singh Kalsi): C.S.R. Reddy Memorial Civil Services Golf Meet–2022 organized by the Chandigarh Golf Association ended today with a Prize Distribution Ceremony held on the lawns of CGA Range, Sector 6, Chandigarh. The Hon’ble Adviser to the Administrator Chandigarh UT, Mr. Dharam Pal IAS, presided over the ceremony as the Chief Guest. 68 officers Both Serving and Retired from different states took part in the tournament which was held on 10th and 11th December at the Chandigarh Golf course.

Prizes were given in two categories i.e. Serving and Retired Officers (Veterans). Various prizes included Gross as well as in Nett Category on the Score over 18 holes, for both Serving and Retired officers. Amongest Serving Officers Mr. Rupinder Sing PPS was declared as the winner in Gross Category and Mr. Aditya Gupta PCS was runners up. In the Nett Category Mr. Gaurav Toora IPS won followed by Mr. MS Rawat IPS who was declared as Runners up.

In the Retired officers Gross Category Mr. JS Khaira CPS Won and Mr. Ashok Gupta IAS (Retd) was Runners up. In the Nett Category Dr. Jagmohan Verma was Winner and Mr. GS Mangat was Runner up.

Mr. Dharam Pal IAS , Adviser to the Administrator UT Chandigarh was welcomed by Col HS Baidwan, Secretary Chandigarh Golf Association who also briefed about the Civil Services Tournament and its revival after a gap of three years.

The Chief Guest remembered the contribution of Mr. CSR Reddy IPS in the building of the CGA Golf Range and the in promoting the Training Facilities and appreciated the efforts of the current management of Chandigarh Golf Association in dedicating this tournament in the name of Late Sh. CSR Reddy. In his their address Mr. SK Sharma IPS (Retd) ,President of CGA remembers the unmatched contributions of Late Mr. Reddy in not only getting this land on lease from Chandigarh Administration but also directing his efforts in making CGA Golf Range a place of excellence and also bring National Golf Academy of India in CGA Golf Range.

How will Diya meet her responsibilities as a…