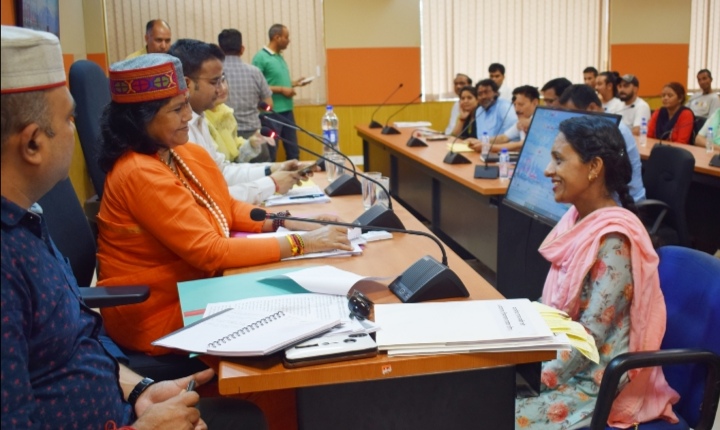 Union minister of State, Food Supply, Public Distribution System and Rural Development Minister Sadhvi Niranjan Jyoti said that the Modi government at the Centre will fulfil the vision of self-reliant India. “During the last eight years, the central government has started many programs and welfare schemes, which have improved the living conditions of the poor and the deserving people,” she said. She also informed that under the various schemes, funds are being transferred directly to the beneficiaries in their accounts.

Union State Food Supply, Public Distribution System and Rural Development Minister Sadhvi Niranjan Jyoti presided over  the beneficiary dialogue program in Dharamsala on Saturday. She  said that effective steps are being taken to take the benefits of central and state government schemes upto the last person of the society.

She said that the schemes launched by the Center and the State have brought changes in the housing, availability of drinking water, food, health and nutrition, livelihood and financial inclusion of the people.

Minister added  that in the last years the pace of development  has doubled, even in adverse circumstances like the corona epidemic, right from vaccine to ration everything was  easily made available for the common people.  She said that the poor section of the society were  directed towards  employment.

She  said that taking care of the social concerns, the Central Government has also started the PM Fund for Children, in which help has been provided for the education of orphaned children.

On this occasion, the Union Minister of State also established a dialogue with the beneficiaries and also took feedback about the schemes.

Officers of various departments including Deputy Commissioner Dr Nipun Jindal were present on the occasion.

Prior to this Minister Sadhvi Niranjan Jyoti  inspected the Jan Aushadhi Center in the Medical College Tanda and gave directions for better operation of the Jan Aushadhi Center so that the patients could get better facilities. Union State Food Supplies, Public Distribution System and Rural Development Minister Sadhvi Niranjan Jyoti, who is  on a two-day visit to Kangra district also  visited  Brajeshwari Dham in Kangra and Baglamukhi temple in Vankhandi on Saturday.