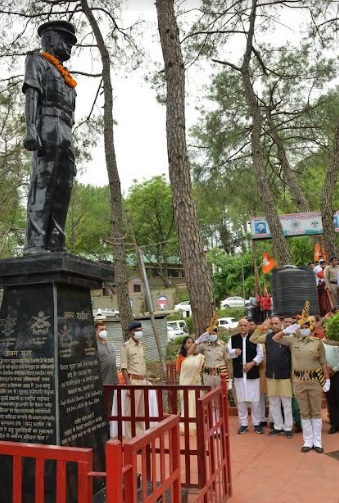 “Kargil Vijay Diwas is a symbol of unwavering patriotism, extraordinary bravery, valour and determination of our armed forces and on this historic day every Indian remembers the sacrifices of our brave soldiers with a sense of gratitude”. This was stated by Chief Minister Jai Ram Thakur while presiding over the State level Kargil Vijay Diwas function today held at Hamirpur and paid tributes to the martyrs of Kargil War.

Chief Minister said that Kargil war was a symbol of bravery, courage and sacrifice of our armed forces as they fought valiantly in extremely harsh conditions to defend our motherland. Their act of valour and indomitable spirit will remain etched forever as a defining moment in India’s history.” 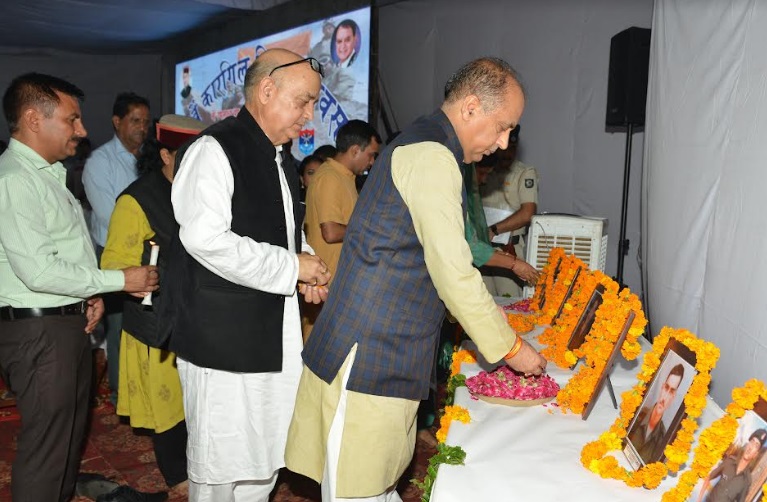 Jai Ram Thakur said that  Kargil Vijay Diwas was a victory saga written 23 years ago at the peaks of Kargil and would be motivating the generation to come. He said that in 1999 after the Pakistani intruders and Pak army infiltrated the Indian peaks, the Indian soldiers initiated Operation Vijay against them on 8th May to throw them out. He said that the then Prime Minister Atal Bihari Vajpayee at that time had warned Pakistan that the world has seen Indian respect to peace, and now the world would witness India’s military might and valour.

Chief Minister said that   the victory achieved during Operation Vijay was the victory of the brave-hearts of the country. He said that out of 527 Indian soldiers martyred during Kargil War, 52 martyrs were from Himachal Pradesh and out of four Param Vir Chakra winners two were from the State. Captain Vikram Batra was one such brave-heart from Palampur of the State, who sacrificed his life for the country. He said that  Hawaldar Sanjay Kumar of District Bilaspur was also honoured with Param Vir Chakra, for his gallantry during Kargil War.  He said that Himachal Pradesh is known as Vir Bhumi and has always followed the tradition of courage and sacrifice.

Jai Ram Thakur said that the Kargil war infused a sense of nationalism and patriotism in the hearts of every Indian. He said that the Centre and State Governments also ensured that the family members of martyrs get all possible help during the testing times. He said that Rs. five lakh each were provided to family members of the 52 soldiers martyred during the Kargil war and 12 soldiers with more than 50 percent disability were provided with ex-gratia grant of Rs. 2.5 lakh. He said that under a special scheme of Union Ministry of Petroleum and Natural Gas, a provision of providing petrol pump and gas agency has been made for the dependents of martyred soldiers of Kargil war and other military operations. About 28 dependents of martyred soldiers have been provided gas agencies and petrol pump through Department of Food and Civil Supplies in the State.

Chief Minister announced Rs 70 lakh for construction of a ‘Shaheed Park’ at Hamirpur near statue of Shaheed Captain Mridul Sharma. He also announced opening of Jal Shakti Sub Division at Didwin Tikkar on the occasion.

He also lauded the ‘Agniveer scheme’ launched by the Centre Government for recruitments of youth in the Indian Army. He said that the State Government would also provide Government employment to all the Agniveers retiring from the Army.

He also honoured the ‘Veer Naris’, widows of martyrs and other family members of martyrs on the occasion.

A documentary on Kargil war was also screened on the occasion.

Supreme scrifice by soldiers in Kargil war will…