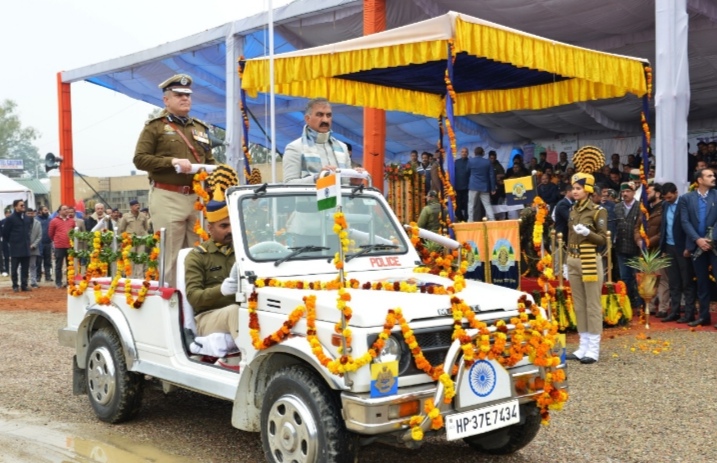 Chief Minister Thakur Sukhvinder Singh Sukhu conveyed his greetings to the people of the State on the occasion of 53rd Statehood Day celebration held at Hamirpur, today. He unfurled the National Flag and took salute from the contingents of Police, Home guards, Jawans of IRB Skoh, NCC cadets, Scouts & Guides led by DSP Ankit Sharma during an impressive march past.

The Chief Minister while addressing the gathering said that people of Himachal Pradesh have contributed immensely in the development journey of the state. He also mentioned the enormous contribution of the first Chief Minister, Dr. YS Parmar in the progress of the hill state. “It was on 11th December 2022 when the new government took over the reign of this hill state and from the very first day started to work for revamping the derailed system” said the Chief Minister. As per the Government’s pledge for zero tolerance against corruption, stringent measures were being adopted to eliminate this social evil. The suspension of Himachal Pradesh Staff Selection Commission, which was the hub of corruption and was selling jobs, was the first in this direction against corruption. “Now the selection will be ensured purely on the basis of merit, in a fair and transparent manner” reiterated the Chief Minister.

Even the economic health of the state was in utter disarray because of the extravagant spending by the previous government that has led to legacy debt of around 75000 crore, he said. Apart from this, the liability of paying the arrears of Rs. 4,430 crore to the employees, Rs. 5,226 crore of pensioners and Rs. 1,000 crore DA of both is on the present State Government. As many as 900 institutions were opened by BJP in the last 9 months of its tenure, without any budgetary provision, due to which the state has to bear an additional burden of Rs. 5,000 crore. Moreover, approximately Rs. 8,000 crore of NPS is held up with the Central Government. Despite all these challenges, the State Government has fulfilled its commitment to restore the old pension scheme, thereby benefitting 1.36 lakh employees, said the Chief Minister.

He said, restoring the OPS was not a political decision, but the State Government intends to protect the self-esteem of the Government employees besides providing them with social security as they play a pivotal role in the development of the State. The Government was forced to take some tough decisions for generating the resources to fulfill its promises, but tough decisions are inevitable, said the Chief Minister.

The Government has set up Chief Minister’s Sukh-Ashray Sahayata Kosh with an outlay of Rs. 101 crore for providing higher education to beneficiaries of the Kosh for Vocational training in engineering colleges, IIIT, NIT, IIM, IIT, polytechnic institutes, nursing and degree colleges’ etc. The state government will play the role of a guardian for the children living in old age homes and shelter homes, destitute women and children said the Chief Minister, adding that an apparel allowance of Rs. 10 thousand per person per year would be given to these inmates, besides Rs. 500 as festival allowance so that they could also celebrate the festivals, like others, he said.

The Government has decided to open Rajiv Gandhi Model Day-Boarding Schools in each assembly constituency in a phased manner for providing education to the poor children.

Stressing on the employment generation, the Chief Minister said that job-oriented education was the need of the hour so the Government has decided to introduce Technical courses, such as Robotics, BlockChain Technology, Cyber Security, Cloud Computing, Data Science, Artificial Intelligence and Machine Learning in the curriculum of ITI, Polytechnic, and Engineering Colleges. Besides, the Government intends to boost the tourism sector in order to provide employment opportunities to the local people on a large scale and the tourism projects will be linked with the start-up scheme for the youth.

We are also trying to promote investment in the private sector and the government will bring a new investment policy, aiming at an ease of doing business.

The Chief Minister said that the government has set a target to harness hydropower, hydrogen, and solar energy in order to preserve the state’s environment and to make Himachal Pradesh the country’s first green energy state by the year 2025. Apart from this, impetus would be given to Agriculture and allied sectors.

He said that robotic surgery will be available in IGMC, Tanda, and Hamirpur Medical College, soon.

He also honored the wards of freedom fighters and army personnels, specially abled during the function.

A colorful cultural program was also presented by specially abled and other children. The Chief Minister also distributed prizes to the participants of cultural programs and lauded their efforts.