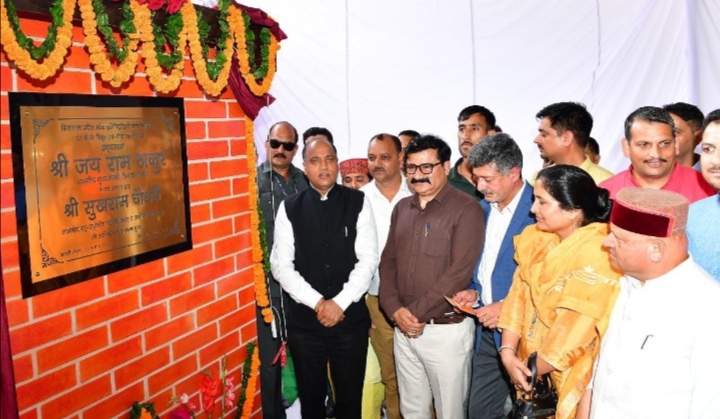 Chief Minister Jai Ram Thakur while presiding over the function organized by the Himachal Pradesh State Electricity Board Ltd. to launch the Scheme, ‘125 Units of Free Electricity’ to the consumers of the State held at famous Paddal ground at Mandi today said that the State Government has taken many such welfare decisions during the tenure of present government to ensure direct benefits to the common people. He said that the State Government recently took a decision that 125 units of free power would be provided to the people of the State which has benefitted over 14 lakh electricity consumers of the State as they were now getting zero electricity bill.

Jai Ram Thakur said that the State generates surplus electricity and it has about 24,567 MW power potential, out of which 11,138 MW stands harnessed. He said that the State has set a target of harnessing 10,000 MW of additional power potential by the year 2030, out of which about 1500 to 2000 MW would be solar power. He said that the State Government has changed policies from time to time to encourage project builders to invest not only in hydro power projects but also in solar, wind and hybrid cum pumped storage. Due to these efforts of the State Government, construction work of 24 hydroelectric projects has been completed in the state during this tenure, he said.

Jai Ram Thakur said that the women constitute fifty per cent of our total population and one cannot even imagine development without active participation and overall development of the women. He said that with this objective in mind, the present State Government was providing 50 percent concession in bus fare in HRTC buses. He said that an additional amount of Rs. 25,000 revolving fund has been provided to all the women self-help groups associated with the village organization. The Government has started Mukhyamantri Swavalamban Yojana to make women empowered and self-reliant and subsidy upto 35 per cent was being provided to them to start their own self-employment venture, he added.

The Chief Minister virtually interacted with beneficiaries of this scheme. He virtually interacted with Aman from Una, Harish Negi from Kinnaur, A.K. Thapa from Dharamshala, Reshma Thakur from Kullu, Rattan Lal from Namhol of Bilaspur, Sanjay Kumar from Hamirpur, Bhamla Devi from Sunni of Shimla, K.R. Kashyap from Solan, Sher Singh from Keylong, Bhupinder from Chamba, Jeet Ram from Sirmour. He also interacted actually with Jayanti Devi and Satish Kumar from Mandi. All these beneficiaries thanked the Chief Minister for starting this scheme for providing 125 units free power to the consumers and providing them much needed relief.

The Chief Minister also inaugurated 33KV Electric Sub Station Kalyard, Mandi with a cost of Rs. 3.29 crore on the occasion.

Power Minister Sukh Ram Chaudhary while addressing the event virtually thanked the Chief Minister for launching this scheme, which has provided much needed relief to the consumers of the State. He said that keeping in view the Covid-19 pandemic, the present State Government headed by the Chief Minister Jai Ram Thakur had earlier decided to provide free electricity up to 60 units and now the State Government has decided to provide 125 units free power to the consumers, which have benefited over 14 lakh consumers.

A film produced by the HPSEB Ltd. on progress the State has made in the power sector was also screened on the occasion.

Additional Director HPSEB Ltd. Anurag Parasar presented the vote of thanks on the occasion.