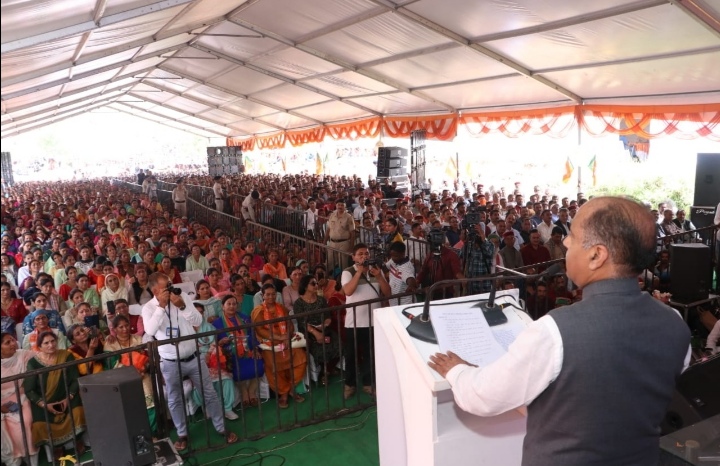 Chief Minister Jai Ram Thakur while addressing a huge public meeting at Rohri in Pachhad Vidhan Sabha constituency of Sirmaur district today on the occasion of Pragatisheel Himachal: Sthapna ke 75 Varsh programme to commemorate 75 years of the existence of Himachal Pradesh said that with the active participation and cooperation of the people the State was heading on the path of progress. He urged everyone to be united and persistent to make Himachal the best state of the country on various parameters of development. He said that the credit for the development of the state goes to the hard work and dedication of every Himachali.

Jai Ram Thakur said that in the last 75 years, there has been an overall development of Himachal Pradesh in all spheres. He said that at the time of formation of the state, there were only 301 educational institutions, 88 health institutions and the per capita income was Rs. 240 and at present more than 16,124 educational institutions and 4320 health institutions were providing quality facilities to the people near their doorsteps and the per capita income has also increased to Rs. 2,01,854. He said that in the year 1948, the length of roads in the state was 228 km, whereas at present, roads of more than 39,500 km length in the state were becoming a means of taking development to every village. Today Himachal Pradesh was the best state in the country in education and health sector. Achievements of the State were better in other parameters of development also, he added.

Chief Minister said that with the completion of 75 years of independence of the country, Himachal Pradesh was also celebrating 75 years of its formation. The country has attained independence after a long struggle and after many sacrifices and it is important to make the younger generation also aware about the sacrifices made by our great freedom fighters, said the Chief Minister.

Chief Minister said that the State Government has started many welfare schemes for the welfare of every section of the society and all-round development of every area of the State. He said that free gas connections have been provided to more than 3.32 lakh women in the state under Mukhya Mantri Grihini Suvidha Yojna. He said that 125 units of electricity were being provided free of cost to domestic electricity consumers and free drinking water was being provided to the people of rural areas.

A theme song based on 75 years of formation of Himachal Pradesh was presented in the function and a documentary on the glorious history and achievements of the state produced by the Department of Information and Public Relations was also screened.

Jai Ram Thakur said that the matter of tarring uprooting of Ochghat Neripul Chaila Marg constructed at a cost of about Rs. 86 crore would be investigated. He directed the Public Works Department to maintain quality in road construction.

Chief Minister said that the BJP government was working towards socio-economic upliftment of weaker sections by staying close to the poor and downtrodden. He urged the people to support not those who only talk but to those who prefer to bring development at the ground level in the upcoming assembly elections.

The Chief Minister also inaugurated the exhibitions set up by various departments, boards and corporations based on the development journey of Himachal Pradesh on the occasion.

MPP and Power Minister Sukh Ram said that during the tenure of the present government, Sirmaur district has emerged as the Sirmour (head) of development in real sense. He said that the Bharatiya Janata Party government was ensuring equitable and balanced development of all the areas and benefits of various welfare schemes were being passed on to the targeted sections well in time.

MP Shimla Lok Sabha constituency and BJP State President Suresh Kashyap said that unprecedented development of Sirmaur district has been ensured during the tenure of the present government. He thanked the Chief Minister for accelerated development in the assembly constituency with inaccessible geographical conditions like Pachhad.

MLA Pachhad Reena Kashyap while welcoming the Chief Minister and other dignitaries said that in the last four and a half years there has been unprecedented development in the state. She said that the Chief Minister has fulfilled all the announcements made for the Pachhad assembly constituency.