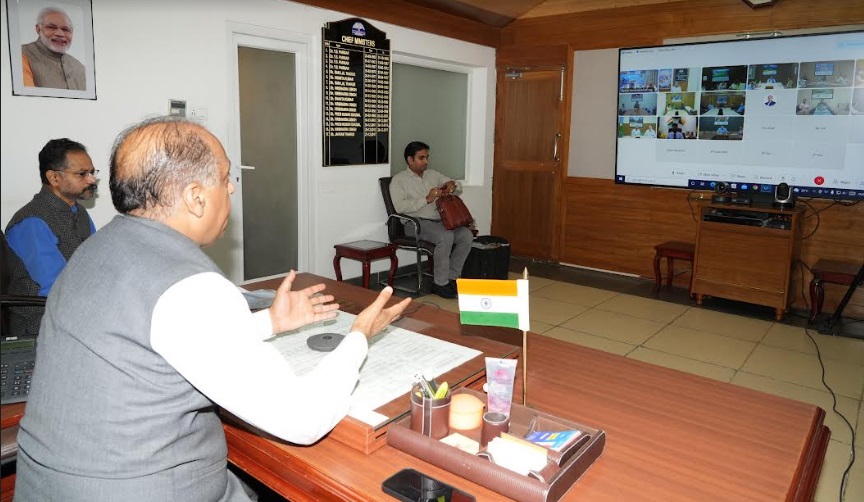 Chief Minister Jai Ram Thakur reviewed preparedness to tackle various emergency situations arising due to heavy rain in the state with the Deputy Commissioners and Superintendents of Police of all the districts through video conferencing from Shimla today.

The Chief Minister directed the officers to make foolproof arrangements for disaster management arising due to heavy rains. He said that adequate number of people and machinery should be deployed in the vulnerable areas that are prone to landslides and other types of disasters.

He directed to take appropriate steps in view of security at the camping sites situated on the banks of rivers in the state. He said that strict action would be taken against the erring officers involved in laxity in work related to disaster management. He directed to ensure availability of Quick Reaction Team and Emergency Operation Centres functional round the clock at the district and sub-division level for disaster management. He said that the roads affected due to landslides or heavy rains should be repaired immediately.

The Chief Minister directed the officials to encourage the tourists to take precautions while visiting the disaster prone areas, so that the tourists do not face any inconvenience and their safety can be ensured.

Jai Ram Thakur directed the Deputy Commissioners to complete all the preparations in a time bound manner keeping in view of the apple season in the state. He said that time bound steps should be taken to maintain smooth traffic movement so that the orchardists do not face any inconvenience.

Chief Minister also made a detailed review of the situation of Corona in the state. He also directed to motivate people to adopt necessary measures to prevent corona pandemic, he said.

Chief Minister took detailed information from the Deputy Commissioners of all the districts about the preparedness for disaster management and the situation in Corona.