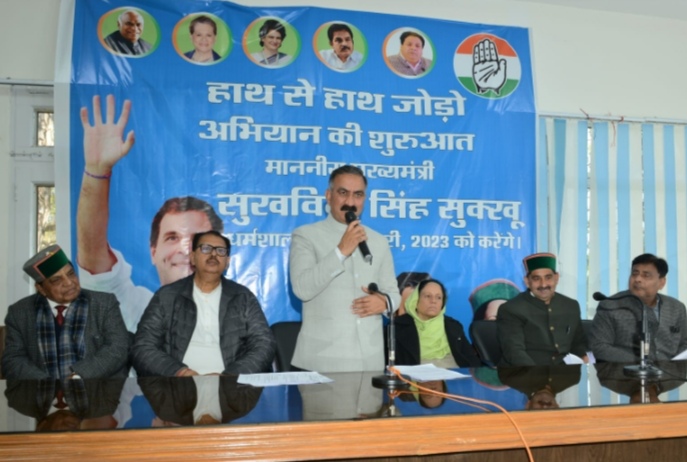 Speaking on the occasion, the Chief Minister said that this campaign is an extension of the successful ‘Bharat Jodo Yatra’ of Senior Congress leader Rahul Gandhi. This campaign would be started throughout the State from 26th January, 2023 and it will reach upto the village and block level in two months. At least one meeting must be ensured in every village under ‘Haath Se Haath Jodo Abhiyan’, he added.

The Chief Minister said that a strategy should be chalked out for outdoor advertisement of this Abhiyan and electronic and print media should also be involved in large number for its publicity and a Whatsapp group should be formed at the village level.

He said that the ‘Bharat Jodo Yatra’ of Rahul Gandhi would enter Himachal Pradesh on 19th of this month and would culminate at Srinagar with hoisting of the Tricolor.  This massive campaign launched by Rahul Gandhi has gone a long way in upholding the unity and integrity of the Nation, he said.

Co-incharge of Congress for Himachal Sanjay Dutt presented a detailed outline of the events planned during this campaign.

MLAs Col. Dr. Dhani Ram Shandil and Kewal Singh Pathania, Principal Advisor (Media) to the Chief Minister Naresh Chauhan, other MLAs and Congress leaders from the district were present on the occasion.