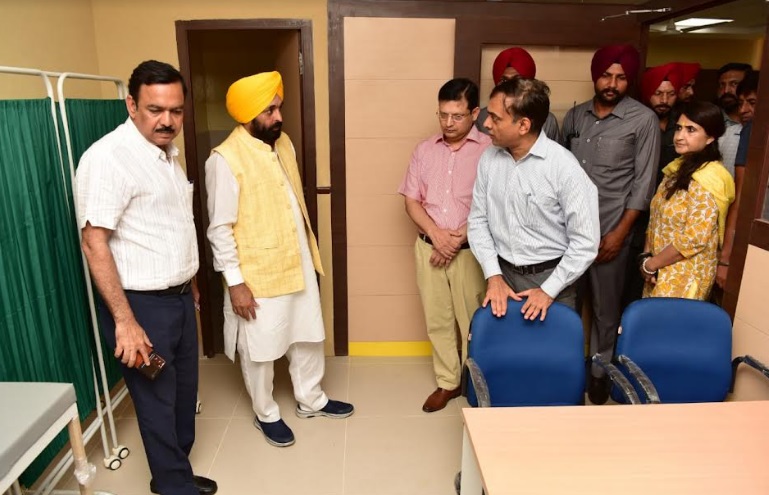 Punjab Chief Minister Bhagwant Mann on Saturday made a surprise visit to check the progress of Aam Aadmi Clinic coming up here at Phase 5.

During the inspection, the Chief Minister, accompanied by Cabinet Minister Brahm Shankar and senior officers of state government, examined the ongoing work in the clinic. Expressing satisfaction over the ongoing work, Bhagwant Mann asked the officers to ensure that the work is completed within the stipulated time frame.

Later on interacting with the media persons, the Chief Minister said that in the first phase 75 such Aam Aadmi clinics will be dedicated to people on the 75th Independence Day on August 15 to provide the best health care services free of cost to the people across the state. He said that every Aam Aadmi clinic will have a staff of 4-5 persons including a MBBS Doctor, Pharmacist, Nurse and others to diagnose and treat the patients. Bhagwant Mann said that 41 packages with around 100 clinical tests will be offered to the people free of cost in these Aam Aadmi Clinics.

The Chief Minister said that his government will fulfil one of the major poll promises with setting up of these clinics both in urban and rural areas. He envisioned that these clinics will be a cornerstone in revamping the healthcare system in Punjab. Bhagwant Mann expressed hope that 90% of patients will get treated from these clinics only thereby reducing the burden in hospitals.

The Chief Minister said that this revolutionary decision will rejuvenate the Healthcare system in state by imparting quality Health service to the people. He said that all the 75 Aam Aadmi clinics are coming up on the uniform pattern with basic interior components including doctor’s room, Reception-cum-Waiting Area, Pharmacy, besides separate toilets for staff and visiting patients. Bhagwant Mann said that online appointment facility for the patients will also be available in these Clinics.

The Chief Minister said that these clinics will provide free medicines and diagnostic facilities to the people. He said that only the serious patients with major ailments will be further referred to the hospitals. Bhagwant Mann also said that the process to hire services of doctors/paramedics is already in the pipeline and so far around 2140 well qualified Doctors have applied for these posts.

The Chief Minister reiterated that the state government is according top priority to Health and education sectors. He said that the Government Civil Hospitals across the state will be spruced up in the coming days for imparting quality health services to people. Likewise, Bhagwant Mann also said that 16 new Medical colleges will also be set up in the state in the coming five years.