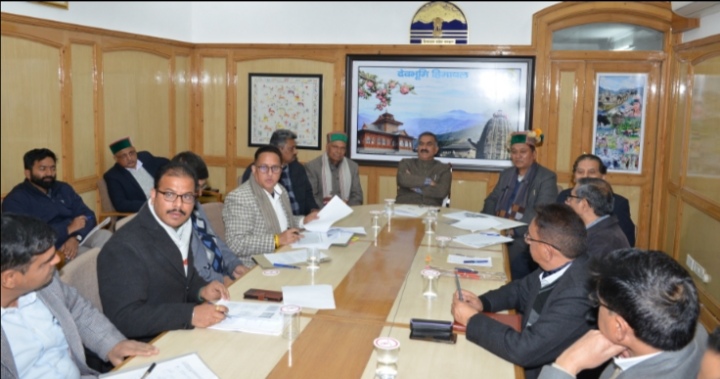 16th   January, 2023
Make necessary amendment in State Disaster Relief  Manual
Chief Minister, Sukhvinder Singh Sukhu, while presiding over a high level Disaster Management meeting at state secretariat here today directed the concerned department to identify the areas more prone to earthquakes particularly in Chamba, Kangra, Kullu and Kinnaur districts and to prepare a detailed report of landslides and sinking zones. He also directed to identify the black-spots which were major cause of road accidents in the State.
Taking cognizance of the recent incident of sinking of Joshimath, in Uttrakhand, the Chief Minister directed the officers to develop an advance warning system to mitigate disasters and improve the Disaster Management Response Capacity System.
Stressing upon adopting the measures to strengthen the Response and Awareness System besides preparedness at the institutional and individual level, the Chief Minister also examined the damages and loss to life and property caused due to various disasters occurred during the past few years.
The Chief Minister was detailed about the sinking zones and landslide prone areas in the state and also took information regarding the preparedness measures adopted from time to time to overcome such incidents. He  also directed to enhance the support being provided to the state electricity board through State Disaster Response Fund and for the necessary amendment in State Disaster Relief  Manual.
Directions were issued for mapping of glaciers through new and advance technology and also asked to conduct a study and submit the report of the areas more prone to earthquakes. The Chief Minister also asked to make proper therapeutic arrangement for the snake bites cases and to make sure that the areas more prone to snake bites are prioritised on the list.
Principal Secretary, Onkar Sharma detailed about the earthquake prone areas and the State disaster management plan. A presentation was given focusing on  the reasons behind sinking of Joshimath, in Uttrakhand and also the  relief and rehabilitation operations being carried out by the Uttrakhand government.
Revenue Minister, Jagat Singh Negi, Chief Parliament Secretary, Kishori Lal, MLA, Suresh Kumar, Chief Secretary, Prabodh Saxena, Special Secretary Disaster Management, Sudesh Kumar Mokhta, and senior officers of various departments were present in the meeting whereas the Deputy Commissioners of Solan, Kangra, Mandi, Bilaspur, Sirmaur, Kullu, Kinnaur and Chamba participated in the meeting through Video conferencing.