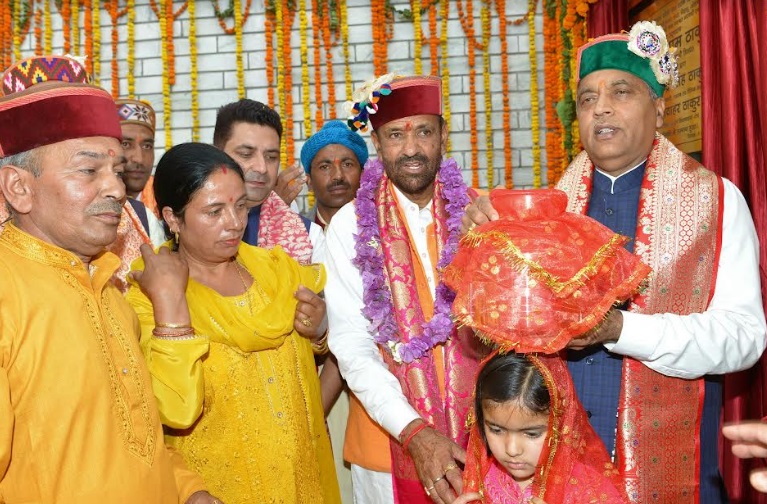 Chief Minister Jai Ram Thakur announced that necessary budget provision would be made by the Language, Art and Culture Department for Dev Shri Ganpati Mandir Bhatwari and Dev Shri Laxmi Narayan Mandir Kot Khamaradha so that it could be developed from a tourism point of view.

Chief Minister was addressing a mammoth gathering on the occasion of ‘Dev Darshan Samaroh’ at Shri Dev Ganpati Temple at Bhatwari in Drang Vidhan Sabha area of Mandi district today. He congratulated the people of the area for being witness to this magnificent temple of Dev Ganpati. He said that Himachal Pradesh was known as ‘Dev Bhoomi’ as almost every village of the State has its own deity and temple. He said that the wood and stone carving in the temple was marvelous and the temple would surely emerge as a major tourist attraction. He said that construction of Lord Ram temple at Ayodhya was only possible due to the strong leadership provided by the Prime Minister Narendra Modi.

Jai Ram Thakur said that the Drang Vidhan Sabha area was almost identical to the Seraj area in respect of developmental needs. He said that the State Government was ensuring that special focus must be laid on those areas which remained neglected so far with one reason or another.

Jai Ram Thakur announced that a Science lab would be opened in Government Senior Secondary School Kot Snor and it would be made a model school. He also announced upgradation of Government High Schools Jala-Khini and Rensh-Nashyar to Government Senior Secondary Schools and Government Middle Schools Thawari and Jwalapur to Government High Schools. He said that Cooperative Bank branch would be opened at Jwalapur (Devkhan). He said that Shala Nala-Oridhar-Bharashi road would be brought under SCCP scheme and Monal-Banogi-Kanda road and Shalanal-Jala-Kashna road would be constructed under NABARD.

BJP would again form the government in the…