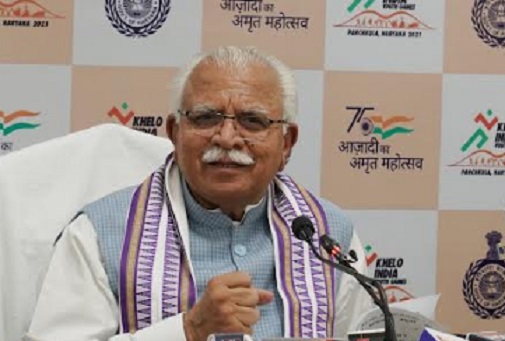 Experience and training are important components of success along with being literate – Sh. Manohar Lal

Haryana Chief Minister, Sh. Manohar Lal said that experience and training are as necessary as being literate. He said that life is all about learning and we should try to learn throughout life, however, training and hard work are two essential ingredients which ensure growth. Deputy Commissioner, Additional Deputy Commissioner and SDM level officers from different districts of the state participated in this training imparted by Commissioner, Gurugram Division, Sh. Rajeev Ranjan. This training programme was organized at the Mini Secretariat of Gurugram. The Chief Minister said that during the 34 years of his life spanning from year 1980 to the year 2014, training has been an interesting subject for him. He said that knowledge gained from books is not sufficient and doesn’t makes one successful, however, training is necessary to get maximum output in minimum time with limited resources. He said that training is a continuous process. He elaborated that a person who lives with the misconception that he knows everything misses out on opportunities to move ahead in life. The Chief Minister further added that there is no age for learning. Citing his own example he said that he himself learned to operate a computer at the age of 40 and is happy to say that it has been useful today. He elaborated that whenever he holds a meeting, the officers are well prepared as the officers are apprehensive that he would point out the gaps. The Chief Minister said that in the last few years, we have ushered in many reforms to improve the system. The Chief Minister said that training has its worth, but it is important to have an open mind. If one has any doubt during the training then it should be definitely attended. He said that during training both the trainer and the trainee get an opportunity to learn.

On this occasion, the Chief Minister asked two questions to the officers undergoing training and asked them to write down their answers without even mentioning their name on it. One of the questions was, since the  officers have joined, which government scheme did they like and is benefitting the general public and it needs to be taken forward.  The second question was whether any other work should be done apart from the schemes which will be of peoples’ benefit. The Chief Minister took the answers of both these questions with him.

Laying emphasis on water conservation, the Chief Minister said to the officers that water is very precious and should be conserved by making the general public aware and imbibing a sense of responsibility in them.
He also said that 80 percent of used water has to be reused.