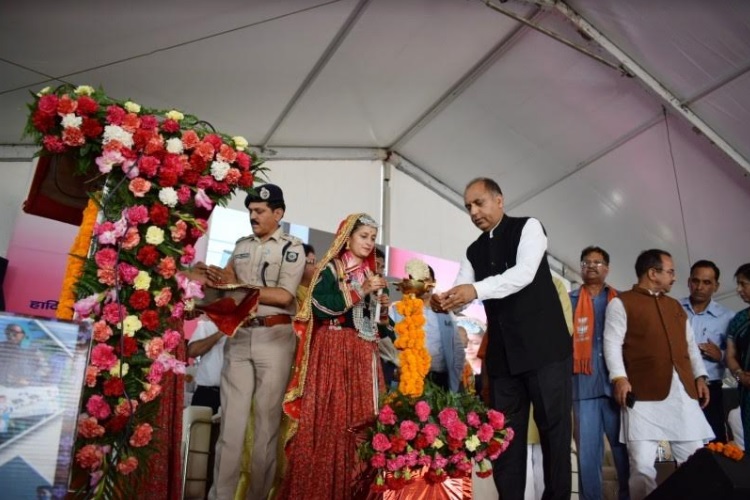 Government has accorded top priority for the welfare and upliftment of women in the state: Jai Ram Thakur

Chief Minister Jai Ram Thakur said that it was previous BJP government which decided and took the landmark decision to give 50 percent reservation to women in Panchayati Raj Institutions so that women could play their significant role in Panchayati Raj. After the women contested with 50 percent reservation, the results revealed that out of all elected representatives, about 58 percent women candidates won and elected to various posts in PRIs.

Chief Minister was addressing a huge gathering of Mukhya Mantri Shagun Yojna beneficiaries at a state-level Labharthi Samman Samaroh organized under the aegis of women and child development department at Baijnath in Kangra district today.

He said under Mukhya Mantri Shagun Yojna, 6626 beneficiaries have been benefited so far by spending over Rs. 17 crores. For the current financial year a budgetary provision of Rs. 27.30 crores has also been made.

Underlining active role and participation of women in the activities of self-reliance in the state, the Chief Minister said women entrepreneurs have also come forward to set up their ventures under Mukhya  Mantri Swawlamban Yojna and they succeeded to achieve remarkable returns. Under this ambitious scheme, investment of Rs. 623.90 crores has been made with disbursement of subsidy among the beneficiaries to the tune of Rs. 190.53 crores. As many as 10253 persons have got direct employment opportunities, he added.

Chief Minister said the government has accorded top priority for the welfare and upliftment of women in the state. Detailing the various initiatives taken by the government, he said recently the government has taken a historic decision to provide 50 percent concession in bus fare in HRTC buses  to women passengers which would benefit lacs of women commuters. During the regime of present government, increase in remuneration to ASHA workers, Anganwadi workers, mini Anganwadi workers, Anganwadi helpers and Mid-day Meal workers has been ensured with a view to benefit thousands of such important workers discharging their duties at ground level, he added.

Chief Minister said under Mukhya Mantri Kanyadan Yojna, financial assistance increased from Rs.31000 to 51000. Similarly, financial assistance has also been increased to Rs. 21000 under Beti Hai Anmol Yojna. During the previous year, 30,851 girls were benefited and over Rs. 9 crores were spent on it. During current financial year, 2633 girls have been provided assistance so far, he said. Chief Minister told that the government has also taken a decision to provide Rs.25000 additional revolving fund as top up to self help groups.

He asserted that Himcare Yojna, Sahara Yojna and Grihini Suvidha Yojna have proved to be a relief to the people of state.

Chief Minister also announced to open a degree college at Chadhiyar under Baijnath constituency. He announced construction of a science lab building at GSSS Chadhiyar and naming the Maheshgarh road after the name of Shaheed Rakesh.