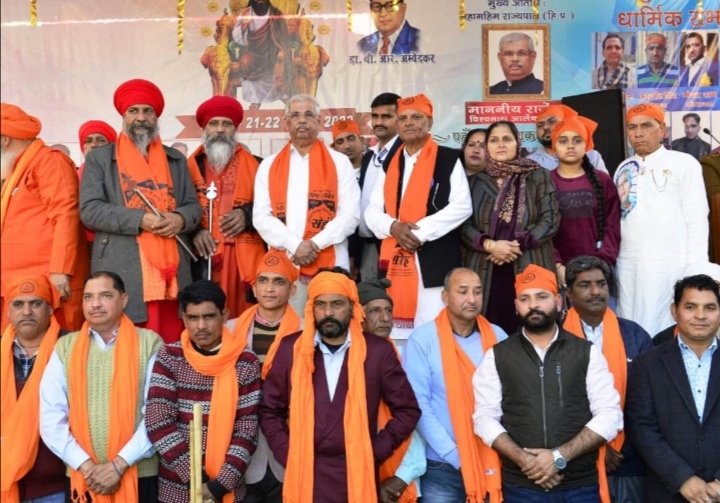 Governor appeals to follow the teachings of Sant Ravidas ji

Governor Rajendra Vishwanath Arlekar said that Sant Guru Ravidas Ji did not belong to any one community but his teachings were for the entire humanity which is more relevant today. He emphasized on following the teachings of Sant Shri Ravidas ji to build a discrimination free society.

Addressing a mammoth gathering in the famous Jod Mela at Santokhgarh in Una district, present as a chief guest, he said that Jod Mela is historical which has a history of struggle. Those who fought for the construction of the temple here were respectable for all of us, he added. He called upon the temple committee that the story of this struggle should be published in the form of a book so that future generations could know its history.

“The thoughts of Sant Ravidas ji were for the nation and he was the saint of the nation. His lessons need to be adopted in life. We should move forward with the thoughts of such a great saint dedicated to the nation, country and society”, said the Governor. He urged the people to take the society forward by adopting the teachings of great saints like Guru Ravidas ji.

On the occasion, the Governor honoured the persons associated with the temple construction during the struggle period. He also honored the family members of Shingara Ram Sahungra, the founder of Shri Ravidas Jod Mela.

We should do natural farming to save our…