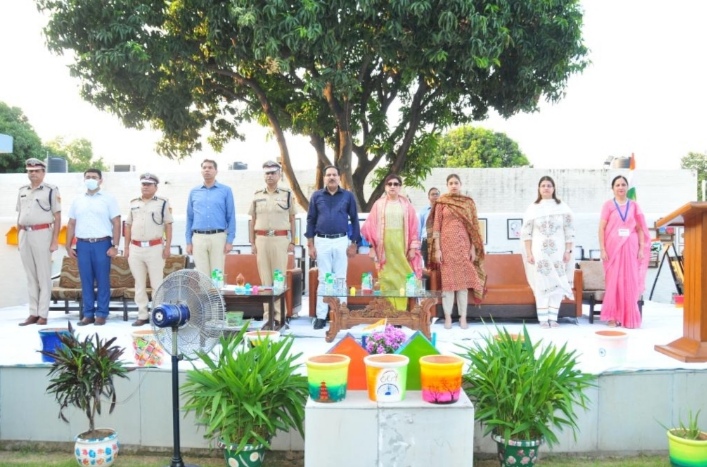 Guinness World Record of World’s ‘Largest Human Image of a Waving National Flag’ created in Chandigarh with the participation of 5,885 people

Guinness World Record of World’s ‘Largest Human Image of a Waving National Flag’ has been created today in Cricket Stadium, Sector 16, Chandigarh with the participation of 5,885 people.

Governor of Punjab and Administrator of UT Chandigarh, Shri Banwarilal Purohit, Union Minister of State for External Affairs, and Culture, Smt Meenakshi Lekhi and other dignitaries attended the event held today amid loud chants and cheers from the gathering, who witnessed this  special occasion.

Speaking on the occasion, Governor of Punjab and Administrator of UT Chandigarh, Shri Banwarilal Purohit said that with the successful creation of this world record of ‘World’s Largest Human Image of a Waving National Flag’ formed today in Chandigarh has given a great message to the entire world, on the 75th anniversary of India’s Independence Day. Congratulating the participants for the successful event, Shri Purohit said that this is the first of its kind event in the entire India.

Addressing the gathering, Union Minister of State for External Affairs, and Culture, Smt Meenakshi Lekhi said, “Thousands of our youth gathered here to form the waving image of our tricolour, there could not be a better view in the entire country than what we witnessed here today. Congratulations to the NID Foundation, Chandigarh University and most importantly the students, who made this dream of mine come true.” Thanking the Union Home Ministry for the allowing people to unfurl national flag, she said that she was overwhelmed by the respect people have in their hearts for the tricolour.

This effort of creating historic record of ‘World’s Largest Human Image of a Waving National Flag’ was undertaken to strengthen ‘Har Ghar Tiranga’ movement with a vision to ignite the spirit of patriotism and nationalism among all of us as a citizen of India. ‘Har Ghar Tiranga’ is a campaign under the aegis of Azadi Ka Amrit Mahotsav to encourage people to bring the Tiranga home and to hoist it to mark the 75th year of India’s independence.

Azadi Ka Amrit Mahotsav is an initiative of the Government of India to celebrate and commemorate 75 years of independence and the glorious history of India’s people, culture and achievements. The programme envisages inspiring Indians everywhere to hoist the national flag at their homes. The aim of the programme is to make the relationship with the national flag a more personal one rather than just keeping it formal or institutional and invoke the feeling of patriotism in the hearts of the people and promote awareness about the tricolour.