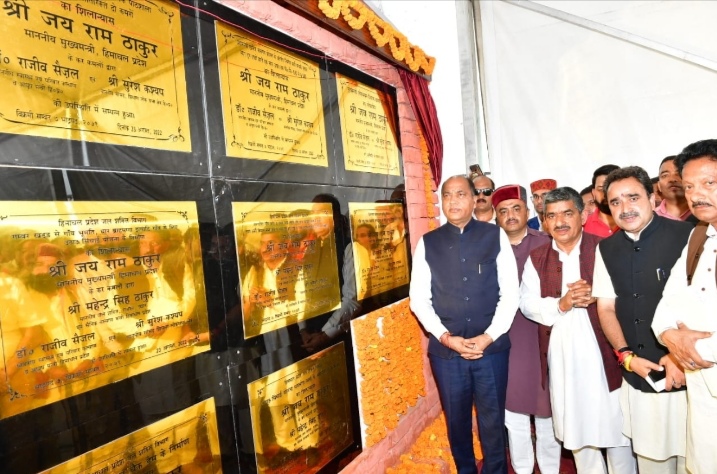 Himachal emerges as a model of development and public welfare schemes during 75 years of its existence: Jai Ram Thakur

CM inaugurates and lays foundation stones of 21 developmental projects worth Rs. 54 crore at Kunihar for Arki AC of Solan district

Jai Ram Thakur said that it was indeed a matter of honour for the people of the State; Himachal Pradesh was celebrating 75 years of its existence. He said that the State Government was celebrating this event in a befitting manner by organizing 75 events throughout the State. He said that the objective of organizing these events was to showcase the developmental journey of the State during these 75 years. He urged the people to actively participate in these events and be part of this glorious 75 years journey of the State.

Referring to the development of Solan district, the Chief Minister said that at the formation of the district in 1972, there were only 476 schools in the Solan district, whereas today the district has over 1108 educational institutions. He said that during his last visit to the constituency, he has announced 14 projects for the constituency, out of which 13 have been completed and dedicated to the people of the area. He said that the previous Government even politicized the Himachali cap and colour of caps and politics of vendetta and victimization was at its peak.

Jai Ram Thakur said that the State Government was spending over Rs. 1300 crore for providing social security pensions as compared to Rs. 400 crore spent by the Congress Government during their tenure. He said that Congress in the State was a leaderless and directionless party where every leader of the party was trying to score a point over one another. He said that the people of the State would ensure Mission Repeat of the BJP Government in the coming assembly general elections by reposing faith in the policies and programmes of the present Government so that pace of development in the State goes uninterruptedly.

Chief Minister said that Grihini Suvidha Yojna, Sahara Yojna, HIMCARE, Mukhya Mantri Shagun Yojna etc., have been proving boon to the vulnerable sections of the society. He said that over 3.32 lakh people have been provided free treatment under the HIMCARE Yojna and over 20,000 people were being provided an amount of Rs. 3000 per month under Sahara Yojna. He said that the State Government was also providing 125 units free power to the electricity consumers of the State and 50 percent concession in bus fare in HRTC buses to women of the State. The State Government was also providing free water to domestic water consumers of the rural areas of the State, he added.

Chief Minister said that the State Government would consider the genuine developmental demands of the area sympathetically so that people could take benefits from them.

Earlier, the Chief Minister inaugurated and laid foundation stones of 21 developmental projects worth about Rs. 54 crore at Kunihar for Arki assembly constituency of Solan district.

The Chief Minister also inaugurated the exhibition based on the theme “Himachal Tub Aur Ab”, put up by various departments, boards and corporations.

Earlier, the Chief Minister was accorded rousing welcome on his arrival at Kunihar.

Health Minister Dr. Rajiv Saizal, while addressing the gathering present on the occasion, said that Himachal Pradesh during the last 75 years of its existence has witnessed unparalleled development in all spheres of development. He said that the almost five year tenure of the present State Government would be remembered in the history of the State as this period was full of achievements and accomplishments. He said that the health sector has been given added priority in matter of development. He said that 500 posts of doctors would be filled soon to ensure that all the health institutions have doctors to cater to the needs of the patients.