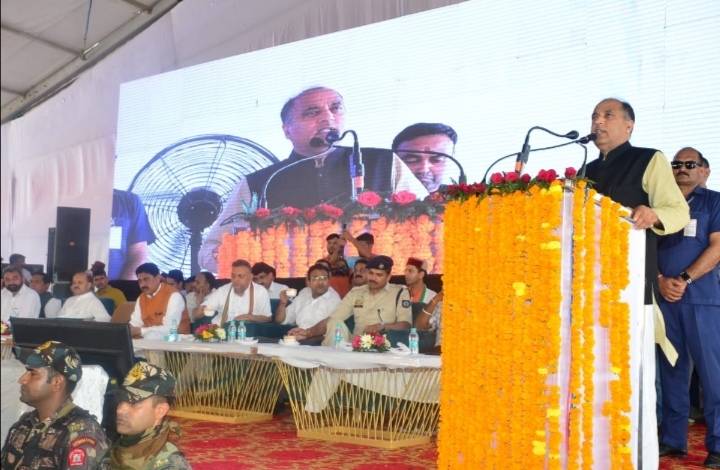 Himachal Pradesh has seen development since its inception

Chief Minister Jai Ram Thakur, while addressing over a massive public meeting held at Baduhi ground in Nurpur of Kangra district today as part of ‘Pragatisheel Himachal: Sathapna Ke 75 Varsh’ celebrations to commemorate 75 years of existence of Himachal Pradesh, said that the 75 years’ journey of the State has been full of achievements and accomplishments and credit of this goes to the hardworking and honest people of the State. He announced the opening of Degree College at Baranda to facilitate the students of the area.

Chief Minister said that it was also a coincidence that as our nation was celebrating ‘Azadi Ka Amrit Mahotsav’ to celebrate 75 years of Indian independence, the State was also celebrating 75 years of its formation. He said that the decision of the Prime Minister Narendra Modi to celebrate this historic occasion in a befitting manner by hoisting the Tricolour on every house in the country under ‘Har Ghar Tiranga’ campaign was also commendable. He said that the State Government has also decided to celebrate 75 years of its existence in a befitting manner by organizing 75 events throughout the State. The main objective to celebrate this occasion was to educate the younger generation about the developmental, cultural and political journey of the State, he added.

Forest Minister Rakesh Pathania, while welcoming the Chief Minister and other dignitaries present on the occasion, said that the biggest demand of Nurpur constituency to make Nurpur as a Police district was fulfilled during the tenure of Chief Minister Jai Ram Thakur. He said that opening of Bulk Drug Park which has been sanctioned for the State would give a big boost to the development of the region and the whole State. He also thanked the Chief Minister for always being considerate towards the developmental demands of the people of Nurpur area..