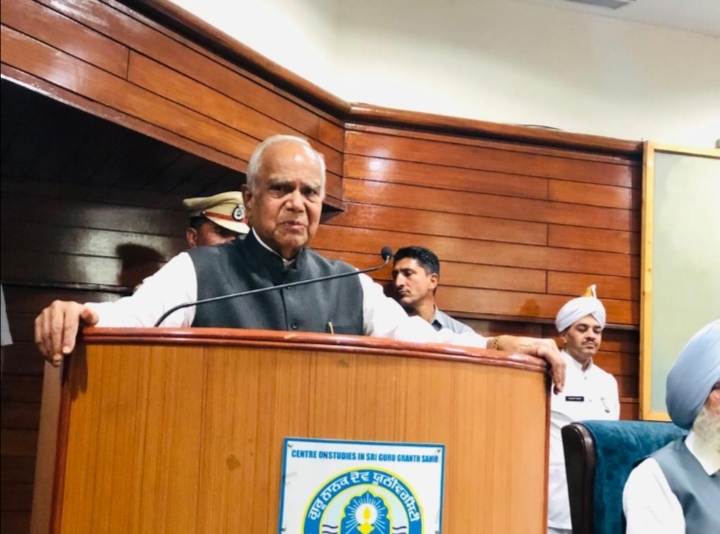 Expresses concern over illegal mining in the border areas

On his second tour to the border villages of the state, Governor of Punjab, Mr. Banwari Lal Purohit while addressing the sarpanches of the border villages and other prominent people of the district said that Punjab being a border state is very important from the point of view of security. “We need to be more vigilant to thwart any attempts towards disrupting peace and tranquility of Punjab and the country.”

BSF and other security agencies are working diligently to stop the smuggling of drugs and arms across the border but, the common people should also be vigilant along with security agencies to foil the nefarious designs of the enemy. They should promptly report suspicious activity, if any. They should especially be extra vigilant of the air dropping of contraband via drones from across the Zero Line.

Governor suggested forming Citizens Defense Committees in the border villages like the initiative taken up in district Gurdaspur. He said that with the vigilance of the Defense Committees, anti-social and anti-national elements can be identified and apprehended. He said that he would suggest the state government to form citizen security committees in the six districts of the border region to assist in village security and to work on social issues in their respective areas.

Expressing concern over illegal mining in the border areas, Shri Purohit said that illegal mining is border areas is a threat to the security of the country. He instructed the officials to keep a hawk’s eye over illegal mining near the border and opined that along with other charges, a case of treason should be registered against those guilty of mining in the areas that jeopardize National Security. “The security of the country is paramount and no negligence will be tolerated”, said he.

There are reports of existence of police criminal nexus in some border areas; in the interest of the country this alliance needs to be broken effectively, said he.

In order to eliminate unemployment from the border region, the Governor urged the youth to take maximum advantage of the army’s Agnipath scheme.

Later, the Governor held a detailed discussion with the officials of Administration, police, BSF, RAW, Army and other agencies working for the security of the country in the border areas.