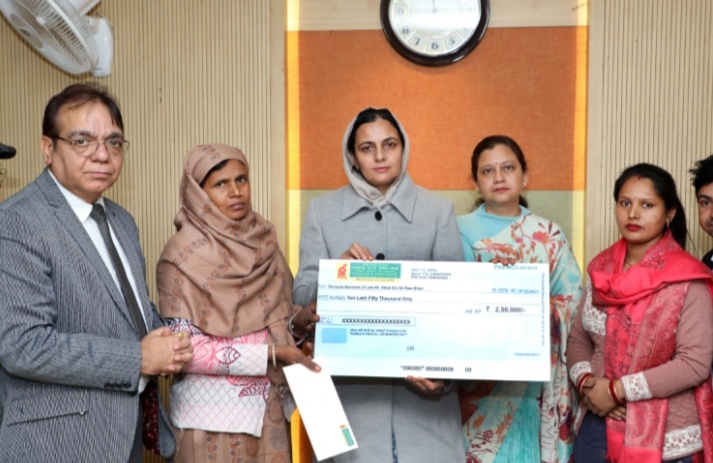 Kin of two deceased outsourced MCC employees handed over cheques of 2.5 lacs each

1st disbursement of its kind in the banking history of the nation – insurance amount paid for death due to natural causes, without payment of premium being deposited by beneficiary

Smt. Sarbjit Kaur, Mayor and Ms. Anindita Mitra, IAS, Commissioner, Municipal Corporation, Chandigarh handed over cheques of Rs. 2.5 lacs each to the kin of two deceased outsourced MCC employees for death due to natural causes, as insurance cover provided by the Punjab and Sind Bank.

Smt. Anindita Mitra, IAS, Commissioner, Municipal Corporation Chandigarh said that this was the first of its kind death cover of insurance provided by the Bank without payment of premium either by the MCC or the beneficiary . She said that this was made possible only with the insurance scheme of all employees of MCC on their salary accounts @ Rs. 40 lacs for accidental death to families of deceased.

She said that this mega beneficiary scheme for MCC employees, conceived in collaboration with Punjab & Sind Bank, was launched recently. Aiming to provide such exhaustive insurance coverage to about 10500 employees working in the Municipal Corporation and their families noble initiative, which has offered such huge benefit to all MCC employees.

She said that this scheme for all its 10500 employees working in different wings of MC including 925 door to door waste collectors, 543 daily wagers, 76 contract basis and 5272 on the outsourced staff, 1100 employees of Lions firm which is looking after the sanitation work of sectors from 31 to 62