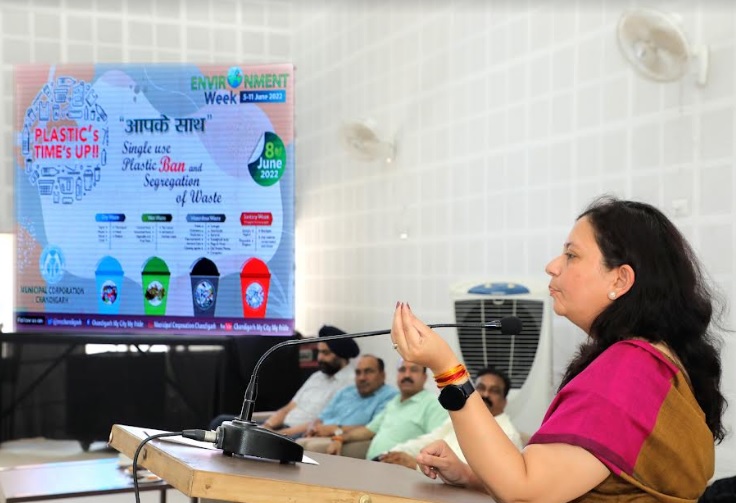 Chandigarh, June 8:- Considering the adverse impacts of single-use plastic items on both terrestrial and aquatic ecosystems, Smt. Sarbjit Kaur, Mayor, Chandigarh gave a call to phase out single-use plastics from Chandigarh. Keeping this in view, various awareness camps under the theme “Aapke Saath” were organized today in different parts of city to engage with Market Welfare Associations.

While speaking during the interactive session on various themes related to single-use plastics and plastic waste management, Mrs. Sarbjit Kaur, Mayor announced a cash prize of Rs. 1 lac to the firstMarket Welfare Association which emerges as Plastic free in the next 3 months.

She said that discouraging people from using single-use plastic, the MCC has been seizing plastic carry bags from the markets and at the same time efforts are being made to propagate the concept of cloth bags. However, shopkeepers May request each customer to bring their own shopping bags and also put up notice boards to that effect.

While addressing the representatives of Market Welfare Associations at community centre, sector 26, Ms. Anindita Mitra, IAS, Commissioner, MCC said that spurred by the mounting mixed plastic waste in the garbage, MCC has chalked out a comprehensive action plan to root out the environmental menace. She said that the MCC has launched three month long aggressive campaign to restrict the use of single-use plastic products in a phased manner with the support of Market Welfare Associations.

Coming forward to eliminate single-use plastic items, the Market Welfare Association in sector 46 decided to extend 2% discount on all items for the residents who bring their own shopping bags for carrying grocery items from the shops. During the awareness programme at community centre, sector 46, the office bearers of Market Welfare Associations assured that they will organise awareness campaigns in their local area against the use of harmful plastic products.