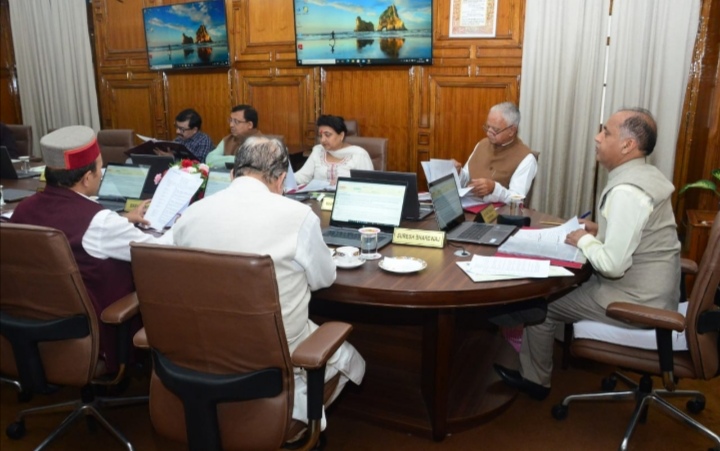 Monthly fellowship of Rs. 3000 to research scholars and other HP Cabinet decisions

The State Cabinet meeting held here today under the chairmanship of Chief Minister Jai Ram Thakur decided to start Mukhya Mantri Shodh Protsahan Yojna in the State under which a monthly fellowship of Rs. 3000 would be given to research scholars for a period of three years from the date of registration. This initiative has been taken to motivate the youth for quality research in different fields.

It gave its nod to grant Child Adoption Leave of 180 days to the regular female employees of the State Government by adopting the Rule 43-B of CCS (Leave) Rules, 1972.

It decided to open two new patwar circles at Mandesar and Dakriyana under Sub Tehsil Krishangarh in Solan district to facilitate the people of the area.

The Cabinet also gave its consent to open two new patwar circles at Hathol and Tyalu in Nadaun assembly constituency of Hamirpur district.

It gave its consent to create new patwar circles at Thapkaur under Indora tehsil and at Kamnala under Nurpur tehsil of Kangra district.

The Cabinet decided to open new Degree College at Balh Seena in Jhanduta Vidhdan Sabha area of Bilaspur district with a provision of Rs. 5 crore alongwith creation and filling up of 16 posts of different categories.

It also decided to open new Degree College at Masrund in Churah Vidhan Sabha area of Chamba district with a provision of Rs. 5 crore alongwith creations and filling up of 16 posts of different categories.

It gave its nod to enhance the Block Government Guarantee from Rs. 35 crore to Rs. 50 crore in favour of National Minorities Development and Finance Corporation New Delhi.

The Cabinet decided to fill up 18 posts of different categories in the office of Advocate General, Himachal Pradesh for its smooth functioning.

It gave its approval to open new Police Post within the premises of All India Institute of Medical Sciences (AIIMS) under Police Station Sadar, Bilaspur district alongwith creation and filling up of 6 posts of different categories.

The Cabinet gave its approval to enhance the honorarium of Special Police Officers posted in border areas of the State by Rs. 900 per month with effect from 1st September, 2022. This would benefit about 510 SPOs deployed in the border areas.

It also decided to set up Transport Nagar at Solan to sort out the problem of congestion in Solan Municipal Area due to haphazard parking and encroached roads and Automobile Repair Shops.

It also decided to upgrade Government Middle Schools, Baila and Churadh in Mandi district to Government High Schools along with creation and filling up of 16 posts.