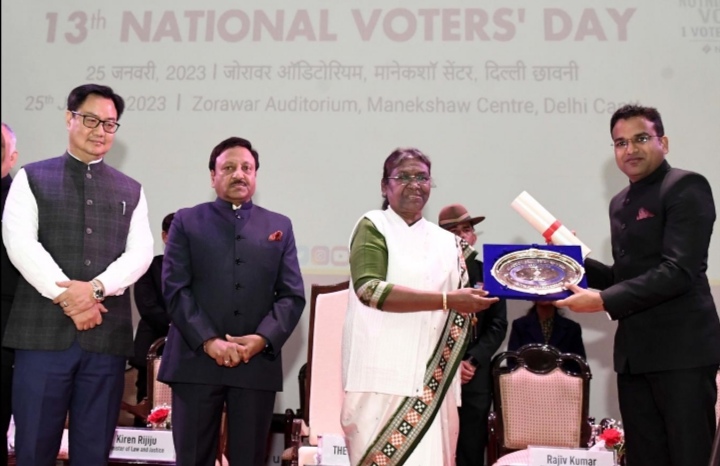 Kangra district Collector and District Election Officer Dr. Nipun Jindal has been awarded the National Award for innovative initiative and best use in the field of information technology in the Himachal Assembly Elections 2022.

Dr. Nipun Jindal received the award from the President of India  Mrs. Draupadi Murmu at a function organized by the Election Commission of India on 13th National Voters’ Day in Delhi on January 25, 2023.

Dr. Nipun Jindal has been awarded for his excellent use in developing and using application e-Catch for digitization of election expenditure monitoring in Kangra district. Due to the innovativeness and efficiency of this initiative, it has been adjudged as the best election initiative in the IT sector all over India.

For the better management of elections in Kangra district, the district administration, taking an innovative initiative, had prepared the E-Catch App (Kangra Application for Tracking Elections). DC Dr. Nipun Jindal had the idea to develop an app for election expenditure monitoring.

Dr. Nipun Jindal said, “ this app has been effective in making the work of various surveillance teams deployed in the field easier and more effective. Kangra is the first district in Himachal to take such initiative, facility to send daily reports online to all the teams related to expenditure monitoring through e-catch app.”

District Collector Dr. Nipun Jindal said that the Election Commission always emphasizes that the election system should be made more effective, transparent and accessible by maximum use of information technology in elections.

The District Collector has congratulated all the people of Kangra district and thanked all the officers and employees who were cooperative in the election process.