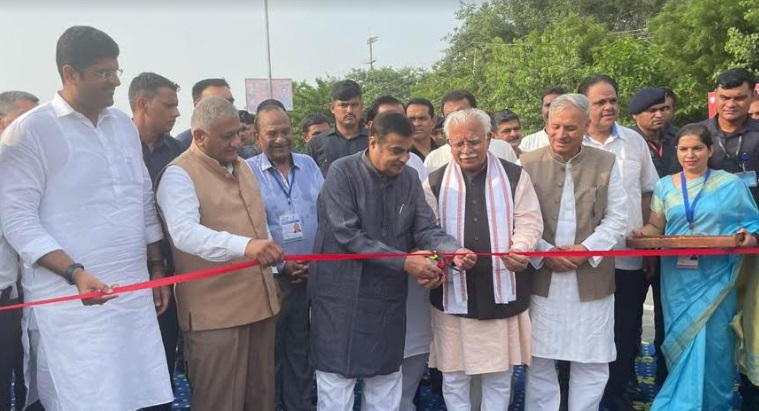 National Highways in Haryana will attract more investors from across the country : Khattar

ROB or RUBs are being constructed at all railway gates in Haryana, 58 were built and work in progress is on 45 – Chief Minister

By laying a network of national highways, investors from the country and abroad will be attracted to invest in Haryana

Haryana Chief Minister, Sh. Manohar Lal said that a network of National Highways is being laid in Haryana, which will attract more investors from across the country and abroad to invest in Haryana.  He said that railway overbridges (RoB) or railway underbridges (RuB) are being built at all railway gates in the state. In the last 8 years, the construction of 58 RoBs or RuBs has been completed and construction of 45 RoBs or RuBs are under progress.

Sh. Manohar Lal was addressing a gathering on the occasion of the inauguration of three major National Highway projects in Gurugram on Tuesday.  Union Road, Transport and Highways Minister, Sh. Nitin Gadkari was the chief guest at the inauguration of these three projects worth about Rs. 3,450 crore.  Many dignitaries including Union Minister of State Rao Inderjit Singh and Haryana Deputy Chief Minister, Sh. Dushyant Chautala were present in the programme.

Referring to these projects, the Chief Minister said that the NH-248A built in Gurugram connects the Delhi-Gurugram Highway with the Delhi-Vadodara Expressway.  This will also reduce the travel time between Gurugram to Sohna.  He said that while earlier it used to take 1 hour to reach Sohna from Gurugram, now Sohna can be reached in just 15 minutes.  Along with this, the Chief Minister also said that according to an estimate, at present about 20,000 vehicles pass through Rajiv Chowk to Sohna and the number of these vehicles will also increase further.  Keeping this fact in view, he informed Sh. Gadkari that the way he has made four lane roads in Chennai, on the same lines, two, three and four lane roads should be built in our state so that the increasing number of vehicles don’t cause traffic jams in future.

The Chief Minister said that such multi-layered roads are seen in foreign countries. Sh. Gadkari  should make such roads here and install meters on them to measure the number of vehicles per hour.  Then we will also be among the leading countries of the world.  He also said that a lot of changes have come in Gurugram in the last 10 years. He said that today Gurugram has become a famous city not only of India but also in the world.  He thanked the Union Minister for his cooperation in making Gurugram free from traffic jams and said that you have been called ‘Flyover Man’ and ‘Highway Man’ because of your ability to improve infrastructure.  Referring to the improvement of road infrastructure in Haryana, he said that new bypasses are under construction in 12 cities of the state at a cost of Rs. 950 crore.

He said that today a four-lane project from Kherdi Mor via Bhiwani bypass till Haluwas village and four-lane project from Rewari to Ateli Mandi on NH-11 were inaugurated. He also said that during the tenure of the current government, 1,070 km long 17 national highways were announced in Haryana. About 669 km of 11 national highways which cost Rs. 20,000 crore were inaugurated and foundation stones laid by Sh. Gadkari. Six of these have also been completed.

Our Power Stations are continually performing well and…