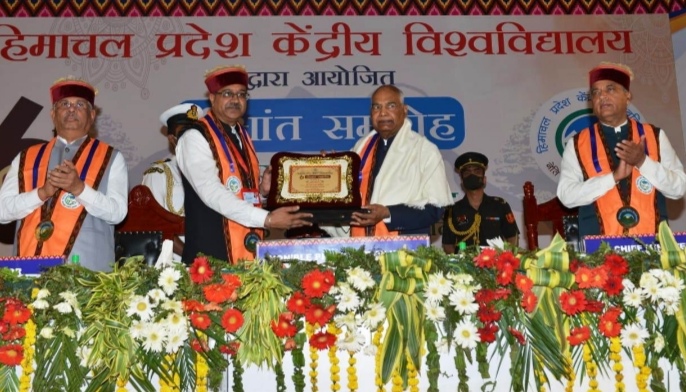 Graces the 6th Convocation of Central University of HP

The President of India, Ram Nath Kovind presented Gold Medals to ten meritorious students during the 6th Annual Convocation of Central University of Himachal Pradesh in a simple but impressive function held in the Auditorium of the University at Dharmashala on 10 th June 2022.

Speaking on the occasion, the President said that education is the cornerstone of the building of any country. Therefore, education should be of such type which not only develops intellectual capacity and skill in the students, but also strengthens their moral values and character. He said that youth have played an important role in the progress of all leading countries of the world.  He also stressed that the participation of women in the field of education is an important parameter for the development of any society.

Addressing the students, the President said that opportunities are available in front of youth like them in many fields and the youth of India have capabilities to utilize these opportunities. What is required is keeping faith in their abilities and moving forward. He said that convocation is an occasion to complete their formal education, but learning would continue throughout their life. They should be ready to learn from everyone, at every step. 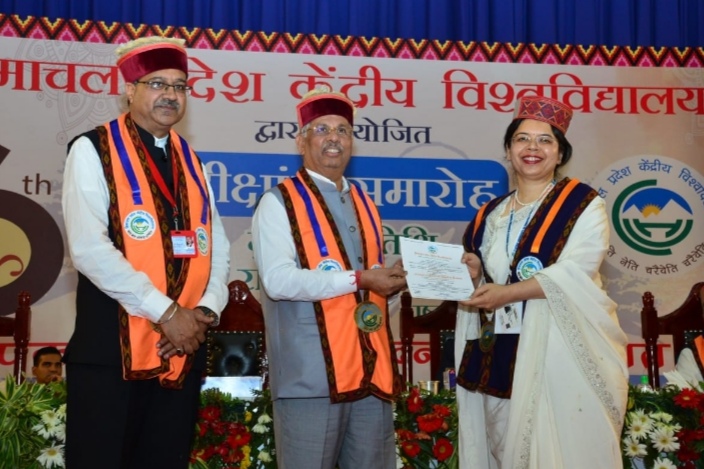 The President said that students should always remember that society has contributed in some way or the other to what they have achieved so far. This is society’s debt on them. They must be prepared to pay for it. How they will pay it, when they will pay it, it is up to them. He said that he has full confidence in the wisdom of the educated, disciplined and determined youth power of India.

Speaking about implementation of the National Education Policy 2020 in the Central University of Himachal Pradesh, the President noted that the University has taken several initiatives to implement its recommendations. He expressed confidence that these initiatives would develop new skills, knowledge and abilities in the students and they would move ahead in life with the spirit of self-reliance and nation-first.

The President said that Central University of Himachal Pradesh has completed 12 years of its establishment. It is high time for the University’s Alumni Association to become active and organize its annual or biannual get-together. He said that alumni of any institution feel special attachment for their institution. Therefore, Alumni Association can play an important role in giving this spirit a useful form for the institution.

Chief Minister Jai Ram Thakur in his address, while congratulating the students receiving gold medals and degrees on this auspicious occasion, said that student life was an important phase of our life which helps in overall development of our personality and hone our creative potential. He said that despite being a small State, Himachal Pradesh has shown a way to several big states in the field of education and the credit of this goes to the teachers of this hilly state.

Vice Chancellor of Himachal Pradesh Central University Prof. S.P Bansal welcomed the President and other dignitaries and presented the progress report of the University. He said that University was striving hard to provide career oriented education to the students with spe Governor Rajendra Vishwanath Arlekar, Union Minister of Information and Broadcasting and Youth Affairs and Sports Anurag Singh Thakur, Social Justice and Empowerment Minister Sarveen Chaudhary, Member of Parliament Kishan Kapoor, Chancellor of Himachal Pradesh Central University Prof. H.S. Bedi, Chief Secretary Ram Subhag Singh, Director General of Police Sanjay Kundu,  members of the Executive Council and Academic Council, Registrar of the  University, Dean Studies, Controller of Examinations, All Heads of Departments, Professors and students were present on the occasion among others.

Earlier the President of India Ram Nath Kovind today arrived at Dharamshala on his two-day visit to Himachal Pradesh.

The President will proceed to Manali tomorrow morning