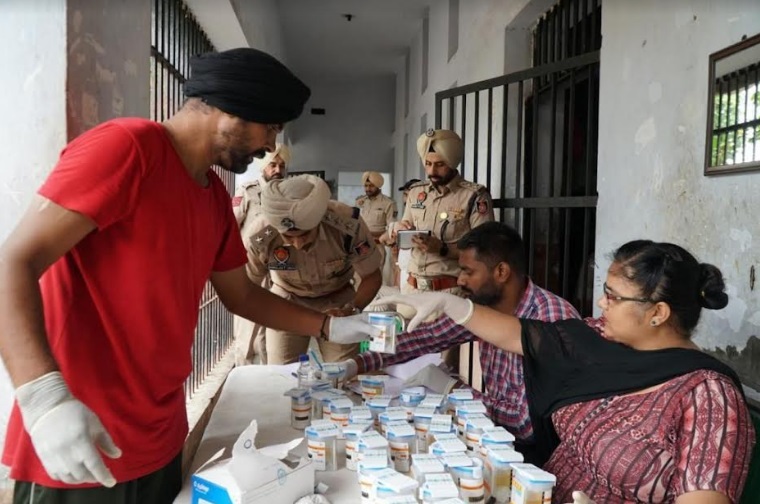 In order to make prisons of the state free from illegal drugs and provide an option to inmates to undergo de-addiction and get rehabilitated, Chief Minister Bhagwant Mann-led Punjab Government on Sunday taking first-of-its-kind step towards jail reforms in the country launched ‘Drug Screening Drive’ for diagnosing drug abuse among inmates.

Under the pilot project, the Roopnagar District Jail has successfully conducted screening of all the 950 inmates present in the jail. The screening was conducted in the presence of Special DGP Prisons Harpreet Sing Sidhu, IG Prisons Roop Kumar and DIG Prisons Surinder Singh, and Superintendent Jail Kulwant Singh. Some of the officers from various other prisons across the state also participated for getting first-hand experience in taking up this drive in their respective prisons. The final results of the screening drive will be available within a day after which further action would be initiated.

The brainchild of Punjab Jails Minister Harjot Singh Bains, this state-wide Drug Screening project aims to make prisons free from illegal drugs besides providing provisions to inmates— who have already fallen prey to drugs, to undergo de-addiction treatment and get rehabilitated.

“It was for the first time such an extensive drive had been taken up to cover the entire inmate population of a prison for drug screening on a single day,” said Jails Minister Harjot Singh Bains, while adding that the process would be undertaken across all prisons in the State.

Divulging more details, he said that this is another effort by the Punjab Government to bring reforms in the Punjab Prisons. “This project will help in identifying those inmates with substance use disorders and are not yet undergoing treatment at OOAT Clinics/Deaddiction facilities established within the prison system,” he said.

“With a view to making these persons undergo de-addiction treatment, FIRs will also be lodged under Section 27 of the NDPS Act in case any such person found consuming illegal narcotics,” said the Minister, while adding that the Jails Department will also request the investigation and prosecution authorities to enforce section 64A of the NDPS Act. He said that this will provide such inmates an opportunity to get themselves treated and avail immunity from prosecution through the court.

The Minister said that the Jails department further aims to involve experts in improving de-addiction treatment, Peer Support, and Counselling facilities for inmates in jails. The Police will be requested to conduct a thorough investigation into all cases registered under this drive to plug any loopholes in the prison system regarding illegal drug supply, he added.

While appreciating the Jails Department, he assured all the support to them in making prisons drugs free and cracking down on any corrupt practices.