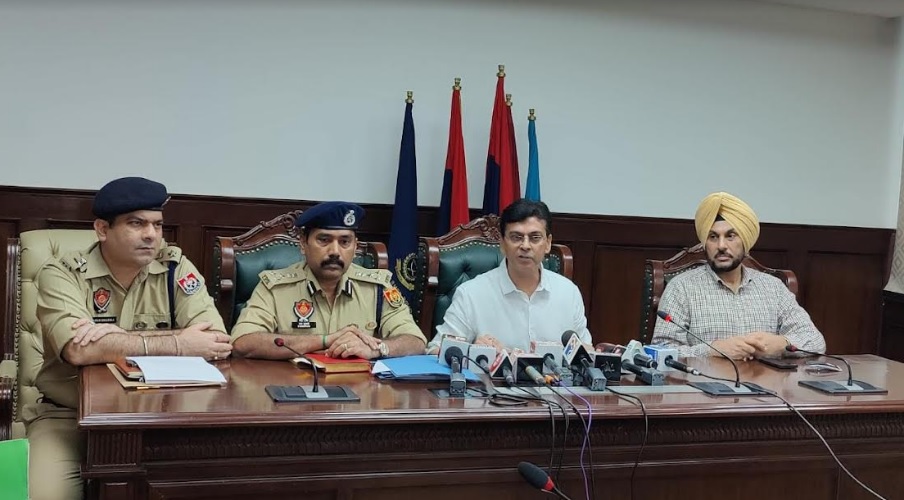 THE GANG WAS ACTIVE IN PUNJAB & NEIGHBOURING STATES

In an extensive and planned operation, the Punjab Police have busted an inter-state gang backed by Gangsters Lawrence Bishnoi and Harwinder Rinda, with the arrest of its 11 members after recovering nine weapons and five looted vehicles from their possession, said ADGP Anti-Gangster Task Force (AGTF) Promod Ban, while addressing a Press Conference here on Thursday. The operation was carried out by the Jalandhar Rural Police.

ADGP Promod Ban, who was accompanied by SSP Jalandhar Rural Swapan Sharma, said that this group was active in several neighboring states and had been involved in crimes including murder, attempt to murder, armed dacoity, organized extortion, dacoity, robbery, and drug smuggling. “With their arrest, Punjab Police has thwarted at least seven murders, two police custody escapes, and four armed robberies,” he added.

The ADGP said that, as per preliminary investigations, the gang was being operated by Vikram Brar, an associate of Goldy Brar on the directions of Harwinder Singh alias Rinda. Notably, Brar, a resident of Hanumangarh in Rajasthan currently residing abroad is wanted by the Police of six states. He is a classmate of Lawrence Bishnoi and is active on social media.

Giving details about arrested persons, SSP Swapan Sharma said that Mohamad Yaseen Akhtar alias Jasse has been missing since a year. A prodigy of Brar and Lawrence, Jasse has been involved in at least 16 criminal activities, he said.

He said that another arrested person identified as Ankush Sabarwal alias Paya, who has six criminal cases registered against him, was a student of Vikram Brar at an IELTS center in Nakodar in 2014 and had been providing shelter and safe house to Saurav Mahakal of Maharashtra, who was arrested by Pune Police. Along with Mahakal, he committed three crimes in Punjab, during Mahakal’s two-month stay in the state.

The SSP said that Arun Kumar alias Mani Rana is a jailed gangster and is operating on the behest of the Lawrence-Jaggu Bhagwanpuria group. The arrested gang had planned Mani Rana’s escape from Police custody during a court hearing in Una, Himachal Pradesh, he said, while adding that Sumit Jaswal alias Kaku has been arrested as he was actively involved in doing recce and organizing logistics for this escape attempt. “With the arrest of this gang, the backbone of organized criminal activities in the Doaba region in general and Jalandhar, in particular, has been broken,” he added.

Pertinently, in the past two months, Jalandhar Rural Police has arrested 32 gang members across the state-affiliated with various jailed gangsters and recovered 38 weapons from their possession.

1
They looted an Airtel distributer on gunpoint and
took away his bag containing Rs 5 lakh 50 thousand
in Nakodar, District Jalandhar on 21 May 2021.

2
Gang shot and killed a tailor Charanjit Singh in
village Chahal, district Tarn Taran on 17-08-2021 due
to gang rivalry.

3
In September 2021, they committed an armed dacoity
whereby Rs. 10,000 was looted from a petrol pump
near a village in Sultanpur, District Kapurthala. They
fired several rounds on the scene of crime.

4
On 03-09-2021, VikramBraron the instruction of
Goldy Brar demanded a ransom of Rs. 30 lakh from a
resident (Name not disclosed due to security reasons)
of Distt. Jalandhar. On refusal by this resident, they
fired shots outside the resident’s house.

5
On 25-09-2021, they executed an armed highway
robbery by snatching a Celerio car on Jandiala to
Phagwara road by using recovered weapons. They
used SX4 Car for this snatching which was also
robbed.

6
On 4 November 2021, they looted a Petrol Pump in
Nakodar, Jalandhar on gunpoint and also fired shots
in the air.

7
After the abovefive incidents, Jasse was given a safe
house in Jodhpur, Rajasthan by VikramBrar.
ManakJaat of Jodhpur was another criminal living
with him, whose liaisingwith Jasse was done by
AnmolBishnoi. There they committed an armed
highway robbery whereby firing two shots.

8
In November 2021, they robbed a vehicle in the area
of Mukandgarh,District Jhunjhunu, Rajasthan.

9
They looted a vehicle from NangalChaudhary area of
District Mahindergarh, Harayana in November 2021
on gunpoint.

10
They committed an armed loot of Rs. 12 Lakhs from
a jeweler in Jodhpur, Rajasthan.

11
They attempted to loot a jeweler in Vadodra, Gujarat
in November 2021. When the jeweler resisted in
parting with a gold jewelry bag, they critically
injured him by shooting on his leg by a 32 bore
Pistol.

12
On 22-12-2021, they snatched an Innova car from
village BilliCharmi, District Jalandhar Rural on
gunpoint.

13
They executed another armed highway robbery in
March 2022, where they snatched a Breeza car.

15
Another medical store was targeted by them in
Mohali whereby they looted Rs. 70,000 on gunpoint.

16
On instructions of Mani Rana and PannuBadala
(both jailed gangsters) who are VikramBrar’shitmen,
this group bought and transported five weapons from
Indore, Madhya Pradesh.

Criminal Activities Prevented by Punjab Police
SN Crime Planned Members involved
Vikram Brar directed this group to kill a
resident of Faridkot (name withheld due to
security reasons) in Faridkot. A recce has
already been done to execute this person.

Another recce was done by them on the
directions of Goldy Brar to execute another
person (name withheld due to security
reasons) in Kotakpura, Faridkot.

They were planning to kill a person (name
withheld due to security reasons) from
Kapurthala on the instructions of GoldyBrar
and Harwinder Singh @ Rinda.

A recce was done and plan made to get Arun
Kumar @ Mani Rana (a jailed gangster and
UAPA accused) out of police custody when
he would be taken on Court hearings from
Una, Himachal Pradesh.

They had also planned an escape plot of
Akashdeep Singh Pannu@PannuBadala(a
jailed gangster) from Mohali during the Court
hearings.

On the direction of PannuBadala, a ransom
call was made to a businessman in Rajpura.

They planned to kill two brothers in Nakodar
due to family dispute.

They planned to execute an accused in a rape
case lodged in Una jail.

They had planned to kill a barber in Kharar,
Mohali.

They had planned an armed loot of a jewelry
shop in Nawashehar.

A businessman from Hoshiarpur was on their
target to kill on the directions of Vikram Brar.

They had planned to rob a Western Union
outlet in Patiala.

Will recover single penny from corrupt nexus in…

Cloud consideration and security in the era of…