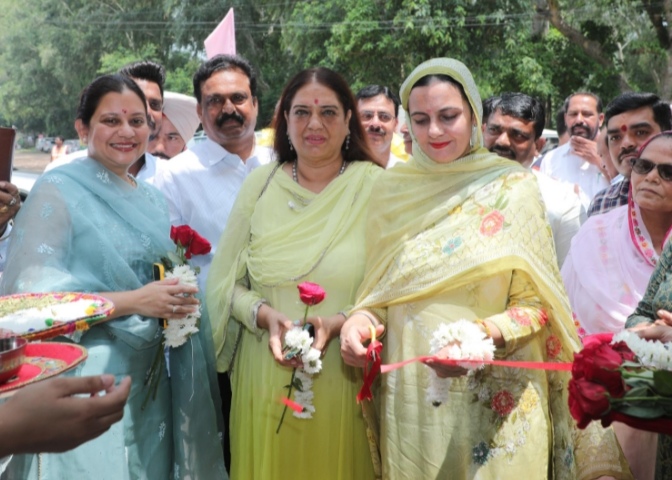 The two days Teej Mahotsav was inaugurated with great zeal in the Shivalik Garden, Manimajra, here today. The colourful function, organized by the Municipal Corporation, Chandigarh today in the morning inaugurated by Mrs. Sarbjit Kaur Dhillon, Mayor of Chandigarh in presence of Ms. Anindita Mitra, IAS, Commissioner,  councilors, officers of MCC and local residents of area.

The function was marked with Punjabi, Haryanvi, Rajasthani, folk dances, songs, fusion of Giddha & Bhangra and Teeian de Geet by famous artists of various states. The audience present in the Mela could not stop themselves to dance on the foot-tapping beats of “Dhol” and popular Punjabi numbers.

The Mayor stressed upon the necessity to perpetuate cultural values among the masses especially in younger generation. She also enlightened the gathering about the social, religious and historical significance of the Teej Mahotsav.

While addressing the gathering she said that Municipal Corporation Chandigarh has made this Mela as an annual feature and this time decided to organize it in Shivalik Garden, Manimajra. She said that people of Chandigarh should know about their rich culture and we the Municipal Corporation are making small effort to gather the precious traditional festivals like Teej.

Earlier, Ms. Anindita Mitra, IAS, Commissioner, MCC welcomed the chief Guest and other Guests and honoured the chief guest with giving traditional fulkari to her. The chief guest took a round in the Mela spread in the 20 acre of shivalik Garden.

Other attractions of the Mela was including camel rides, cart rides, Dholi, Madari, Behrupiya, Been Jogi, Nachar, Nagada, Charkhe, Manjire, Tumbe, Jamura Show, puppet show, Fashion Show, different stalls of sweets and lassi, Maal-Pua, handi crafts, designer fabrics and other domestic items etc. by Self Help Groups and Street Vendors. The stage was decorated with colourful lights and traditional “Jhandian” flags. East meets West as the streets fill with musical sounds, with everything from traditional folk, beats of Dhol and Teej diya Bolliyan to fusion of Giddha and Bhangra.

Besides this, stalls of various services of MCC were showcased including Fire & Emergency Services, Safaimitra, Swachh Bharat Mission, DAY-NULM and Street Vendor Cell where the general public were sensitized about the services.

“Pind Di Nuhar”, a rural setup was the main attraction, where potter wheel taught children and other visitors to make clay pots and coloring the pots. A selfie point was also made with the rural set up, which was very popular spot for the visitors.

Tomorrow morning the Mela will began with folk dances and other shows including Been Jogi, Kal Beliya and Ghumar etc besides Magic Show by famous artist Pardeep Kumar. A culture evening will also be organized by Resham Singh Anmol.

Smt. Darshna, area councilor will be the Chief Guest during cultural programmes on 7th August at 11.30 am and all the Women