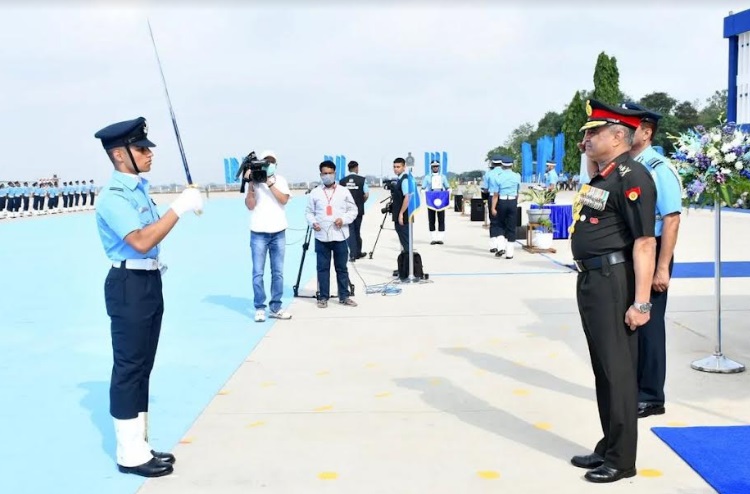 Raghav, who hails from Pathankot, graduated from 6th Course of AFPI to go to the National Defence Academy in 2018. His parents are Doctors and currently running a pharmaceutical business. He has excelled in Volleyball & Squash, and also does sketching and oil painting in his leisure time besides being a part of the NDA sailing team.

He has been allotted the fighter stream and would now be proceeding to Air Force Station, Bidar for his phase-III flying training on the Hawk-Mk-132 Aircraft.

People of the State of Punjab and Maharaja Ranjit Singh Armed Forces Preparatory Institute are proud of their son of soil and wish him happy landings and a bright future.

Expressing gratitude towards Almighty for giving him the opportunity to serve the country, Raghav Arora said, “When we joined this prestigious Maharaja Ranjit Singh Armed Forces Preparatory Institute, little did we know that was what about to kick off!.”

The two years that we spent at AFPI were truly transforming, as they say, we went on to become – from boys, to men, to soldiers, these were the words of the newly commissioned officer.

Raghav, while sharing experience, said that we have been inculcated skills including PT, games, debate and drill at AFPI and the PT instructors were inspiring, though they made the day endless and tiring. The seniors were the Mentors, showing us the path, they always has some tips to give us a head start, he added.

The Sqn Commanders played the crucial role, making us understand what it means to be an officer and more importantly a gentleman, he said.

Raghav Arora said that our Director, the man behind the machine, choosing the harder right instead of the easier wrong- he taught us, is what matters! When the time came to join the Academy, the novices who joined, were now young debaters, sportsmen, scholars and more importantly budding leaders.

Shubhdeep Singh Aulakh, another alumnus of Maharaja Ranjit Singh AFPI (6th Course), was also commissioned in the flying branch of the Indian Air Force and assigned the fighters stream. After passing out from the MRS AFPI, Shubhdeep Singh Aulakh joined the 140th NDA course and later joined 140th PC at the Air Force Academy, Hyderabad and he passed out course on June 18, 2022. On passing out, Shubhdeep Aulakh earned number of awards and trophies. He stood overall First in Flying at the AFA, overall first in the Ground Subjects and the coveted trophy of the Most Accomplished Cadet of his flying course. Also, he stood second in overall order of merit of his course.

Notably, Shubheep’s father is also an IAF veteran, who retired from the rank of Wing Commander. MRS AFPI is proud of the achievements of its ex-cadet and wishes every success in his future career as a fighter pilot of the IAF.