As part of Azadi Ka Amrit Mahotsav, Ministry of Power, Govt. of India is celebrating week-long Bijli Mahotsav under Ujjawal Bharat, Ujjawal Bhavishya – Power @ 2047 from 25th July to 30th July 2022. Sh. Nand Lal Sharma, Chairman & Managing Director, SJVN stated that till date SJVN has assisted in organising 85 Bijli Mahotsav across the Country, with 21 locations in Himachal, 45 in Punjab, 12 in Haryana, 2 in Bihar, 3 in Gujarat and one in Maharashtra.

In Haryana, program was organised at three locations by SJVN along with Distt administration namely Cheeka in Kaithal, Baslhara in Karnal and Damla in Yumunanagar

In Gujarat the event was organized in Surendranagar, City by SJVN along with distt administration.

The event is showcasing extraordinary development in Power Sector over last eight years under the dynamic leadership of Hon’ble Prime Minister Sh. Narendra Modi. To publicize the successes of the Energy Sector, various educational & cultural programs, nukkad nataks and screening of short films were also organized. 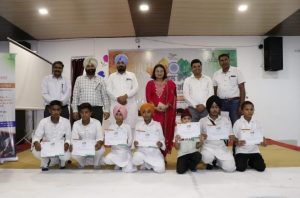 Sharma further apprised, that this week-long campaign, would accomplish with Grand Finale scheduled on 30th July 2022, at 12.30 pm, which will be organised on virtual mode with Hon’ble PM, in 100 locations across the country.

Out of these 100 identified locations, where address of the Hon’ble PM will be Live web casted, SJVN shall assist in organising the Grand Finale in 7 locations namely Panchkula, Karnal & Panipat in Haryana, Jalandhar in Punjab and Shimla & Chamba in Himachal. Besides, the Grand Finale event where 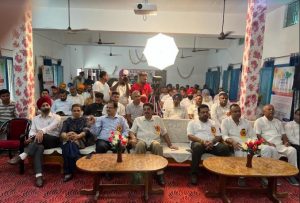 Hon’ble Prime Minister shall be interacting with the five  beneficiaries of the Central Govt. Schemes shall be held in Thunag, Distt. Mandi in Live interaction mode.

Nand Lal Sharma stated that it is great pride for us that out of five beneficiary interacting with Prime Minister, the first beneficiary is Sh Hans Raj Thakur from Mandi, Himachal Pradesh.

Government has accorded top priority for the welfare…