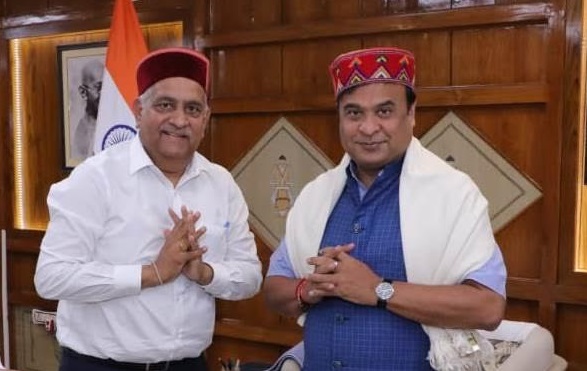 During the meeting development of Ground Mounted, Floating Solar, Battery Storage and Pilot Hydrogen plants in the state of Assam were deliberated. Chief Minister also conveyed keen interest of Government of Assam in equity participation of SJVN’s upcoming Hydro Power Projects in Arunachal Pradesh. He further conveyed that Government of Assam is interested in formation of a Joint Venture with SJVN for development of Hydro and Renewable Energy Projects in the State.

The state of Assam has a vast potential to develop Ground Mounted Solar and Floating Solar Power Projects on existing barren land and water bodies. The Government of Assam offered SJVN an opportunity to explore 5000 MW Power Project Development within the state in a phased manner. During the meeting the proposal for sale of power from SJVN’s Arun-3 Power Project in Nepal & Solar Power generated through CPSU scheme were also discussed.

Sh. Nand Lal Sharma, Chairman & Managing Director informed that under the progressive leadership of Prime Minister Sh. Narendra Modi and guidance of Union Power Minister Sh. R. K Singh, SJVN is adding significant capacities to its portfolio. SJVN has embarked on a fast-paced journey of harnessing Renewable Energy to meet the commitment of Government of India of achieving 500 GW of installed capacity from non-fossil fuel sources by 2030. Having secured many new projects in the last two years, presently SJVN has a total portfolio of around 31500 MW, under operation & different stages of development in Nepal & Bhutan along with eight states of India. These recent additions of New Projects are leading the company towards actualizing its “Shared Vision of 5000 MW by 2023, 25000 MW by 2030 & 50000 MW installed capacity by 2040.”

Cleanliness week is being celebrated on the occasion…