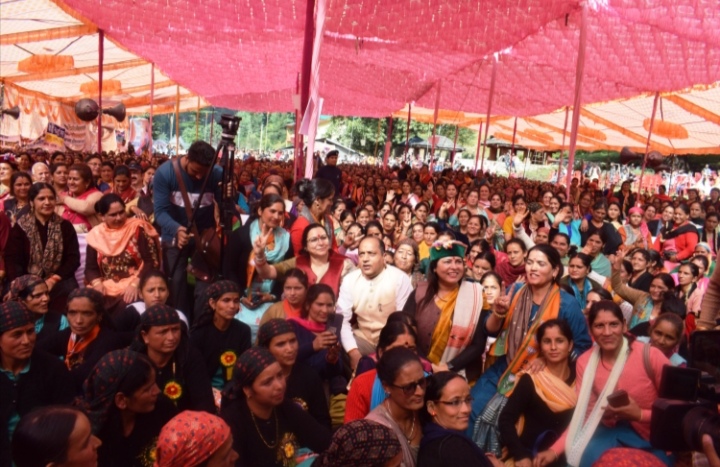 State Government from the very first day of coming to the power had always worked for the welfare of every section, Jairam Thakur

The Chief Minister also laid the foundation stone of nature parks to be constructed in Khodathach and Kholi at a cost of Rs. 1.75 crore and Rs 3.49 crore respectively.

Later, while addressing a “Mahila Sammelan” at Dheemkataru, the Chief Minister Jai Ram Thakur said that the State Government from the very first day of coming to the power had always worked for the welfare of every section of the society including the poor, weaker sections and women. He said that social security pension was being given to all the eligible people above 60 years of age in the state. He said that earlier about 4 lakh people had been getting pension, whereas today more than 7.50 lakh people were being given this pension.

Referring to the welfare and empowerment of women, the Chief Minister said that it was the BJP government in 2010 which had made a provision of 50 per cent reservation for the women in Panchayati Raj Institutions and Urban Local Bodies. Now, the participation of women in these institutions has exceeded 50 percent, added the Chief Minister. He said that the State Government had made a provision of a revolving fund of Rs. 40,000 for the economic empowerment of self-help groups run by the women. 35 percent subsidy was being given to the women entrepreneurs under the Mukhya Mantri Swavalamban Yojna, added the Chief Minister. He said that more than 3.35 lakh women of the state had been given free gas connections under Mukhya Mantri  Grihini Suvidha Yojna.

Jai Ram Thakur said that the State Government had ensured all round and equitable development of every region and welfare of every section of the society during its tenure of almost five years. He said, “It is necessary to form the BJP government again in Himachal Pradesh to maintain this pace of development and to strengthen the Prime Minister Narendra Modi and the Central Government”. He said that the BJP would again come to power in the state and the women would play a decisive role in this. He said that the women of the state would give huge support to the BJP due to the numerous welfare schemes of the present  government.