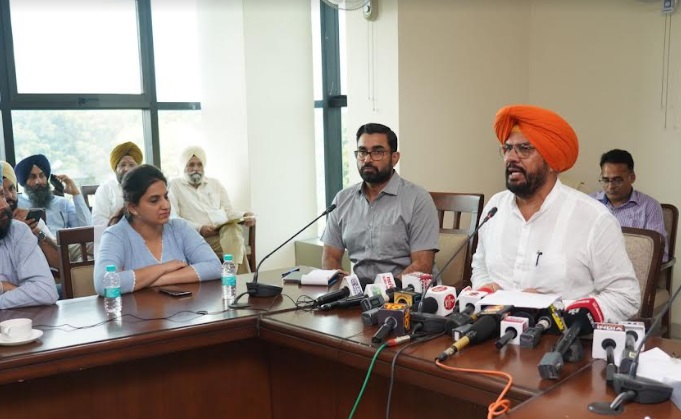 These directions were issued by Mr. Dhaliwal during his maiden meeting with all the officers of the Agriculture Department at Punjab Mandi Board Bhawan here today.  He said that in order to fulfill the dream of Chief Minister Bhagwant Singh Mann to create a colorful Punjab, it was imperative to save the agriculture of the state.  Punjab is an agriculture oriented state and the economy of the state is based on agriculture.  If we save agriculture, we will save Punjab.

The Agriculture Minister said that sale of fake pesticides, fertilizers and seeds would be banned and trict action will be taken if any such counterfeit goods are seized.  He directed the agriculture authorities for eradicating the scourge of counterfeit medicines and seeds from Punjab with iron hands. He said that this was his first objective in this department.

Instructing the agriculture authorities to deal with the possible infestation of pink locust on the cotton crop.  Mr. Dhaliwal said that all the officers from the field officers to the headquarters would visit the vulnerable Malwa belt from tomorrow. He said he would also visit himself.  He said that this time no crop of any farmer would be allowed to be damaged. The 37 teams of the department would inspect and report the condtion of crop in six districts of Narma Patti.

The Agriculture Minister said that marketing would be strengthened to make crop diversification a success and emphasis would be laid on marketing of these crops to promote maize and other allied crops like corn.  He said that direct sowing of paddy was being encouraged by the Punjab government and to achieve this goal the agriculture authorities should promote this scheme as much as possible and ensure access to small farmers.

Dhaliwal said that under the leadership of the Chief Minister of Punjab Mrm Bhagwant Singh Maan, the people of the state have taken an oath to revive Punjab at Khatkar Kalan, the ancestral village of Shaheed Azam Bhagat Singh and in keeping with this commitment corruption in the agriculture department would not be tolerated.  He said that government agencies like Mandi Board, Punjab Agro, PUNSEED, Warehouse should be strengthened.