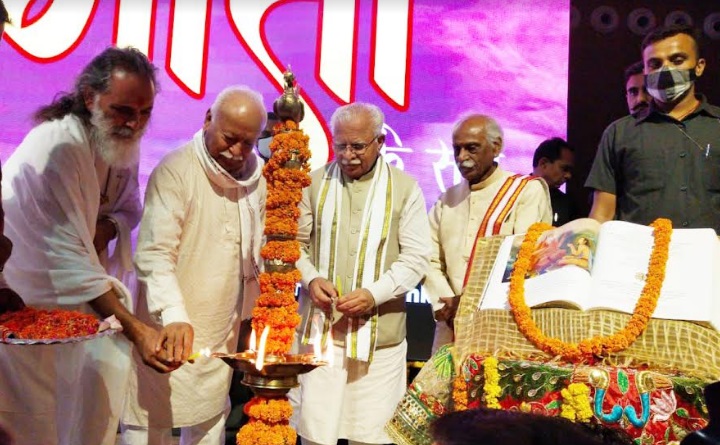 The 40-ft tall ‘Virat Swaroop’ of Lord Shri Krishna was unveiled today on the holy land of Jyotisar in Kurukshetra, Haryana, amid the blowing of conch shells and chanting of mantras.

During the unveiling programme, a magnificent description of Lord Krishna’s journey from  ‘Viraat Roop’ and ‘Vishwaroop’ were also depicted through an incredible light and sound show.

Notably, under the first phase of the renovation of Jyotisar, the first site of the Krishna Circuit project, the statue of Lord Krishna’s Viraat Swaroop has been unveiled today. After this, as per the directions of the Chief Minister, a world-class ‘Jyotisar Anubhav Kendra’ is being set up at Jyotisar, which is likely to be ready in the next year. The Centre will be divided into five buildings. In its first building, information about the events before the war of Mahabharata will be made available.

With the 18 Mirrors installed in the next building, visitors will be able to see the events that happened in 18 Days of War.  Besides this, the visitors can also seek solutions to their problems written in Gita from the interactive pod. In the fifth building, information about the post-war events like the coronation of Yudhishthira etc. will be made available. This Centre will become a Centre of attraction for visitors coming across the globe.

Cloud consideration and security in the era of…