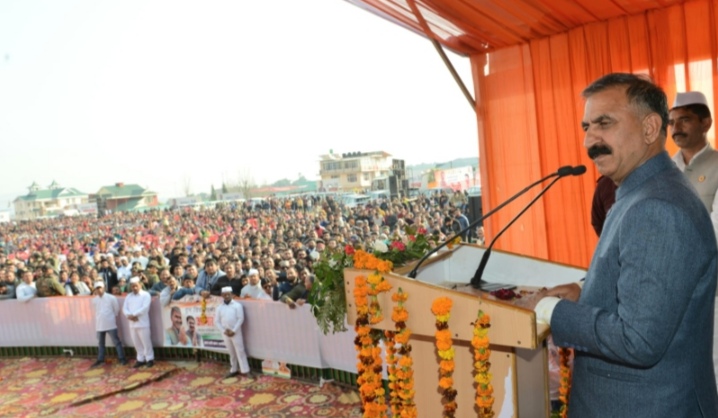 The new government under dynamic and energetic leadership of Chief Minister Sukhvinder Singh Sukhu through its philanthropic and long-awaited decisions has brought happiness in the lives of every Himachali. The Chief Minister, who rose to the topmost position after treading on the path of struggle since he entered politics at a young age is known for taking historic decisions, which now, are reposing faith of people in his leadership and slowly building a sense of confidence amongst the masses within a short span of a month or so.

The Chief Minister with his visionary thinking and resolve to establish the state on a new horizon of development has made a new beginning in Himachal by giving all sections of the society a mantra to live with self-respect.

The state Cabinet in its first meeting, not only restored the old pension scheme as promised, but also constituted cabinet sub-committees to provide Rs 1500 per month to women and to create one lakh employment opportunities. The sub-committee has been directed to submit report within a month. This has ensured that the Sukhu government would always be remembered in the history for fulfilling its promises as promised and not doing so at fag end of the regime as did by previous regime announcing nearly 900 institutions without any budgetary provision with an eye on elections.

Restoration of old pension scheme has provided 1.36 lakh employees of the state the strength which would give them the right to live with self-respect in old age. The decision to restore old pension in the state after a gap of 20 years is undoubtedly a reflection of the efficiency of Chief Minister Sukhvinder Singh Sukhu.

Immediately after taking over as Chief Minister, he aimed for providing support to the weak and neglected sections of the society. His first visit was to Balika Ashram located in Tutikandi, Shimla where he after inspecting the Ashram and interacting with inmates, gave instructions to provide better facilities in various Ashrams so that every girl child living in there may get better life and environ to live. For the institutional care of girls and other destitute people, it was decided to provide a festival grant of Rs. 500.

The State Government also issued directions to celebrate Lohri, Makar Sakranti (Maghi) and Holi festivals in the Child Protection Units, old age homes, Nari Seva Sadans, Shakti Sadans, old age homes etc. and special homes being operated under the department of Social Justice and Empowerment. These historic decisions would certainly help all living in these ashrams to feel as one among equals of the society. Besides, the Chief Minister also came out with another decision of providing Rs.10,000 as Apparel Allowance per year, per person to the inmates of old age homes, deaf and dumb, destitute women and Children. After he visited the old age home at Basantpur in Shimla, he immediately took a decision to provide Rs. 5000 each as apparel allowance for summer wear and Rs. 5000 as winter clothing allowance to such category.

In order to provide higher education to the needy children and secure their future and to provide shelter to the destitute women, the state government decided to set up ‘Chief Minister Sukhashray Sahayata Kosh’ with an outlay of Rs. 101 crore. This Kosh will make the society aware that helping needy children and destitute women is not a pity but is their right. In the ‘Chief Minister’s Sukhashray Sahayata Kosh’, all the MLAs of the ruling party will contribute their one month’s salary. The Chief Minister has already donated his first salary towards this Kosh. All the MLAs of the Opposition have also been urged to provide the same for the fund. Efforts will be made to seek financial assistance for the fund under Corporate Social Responsibility from industry and from philanthropists.

In view of the winter season, the Chief Minister has issued clear instructions to all the Deputy Commissioners to provide shelter to the destitute and keep them safe.

The state government has also given instructions to immediately release an assistance of Rs. 25 thousand to the families affected by the notified natural calamities. Now the assistance amount will be released to the next of kin of the deceased affected by natural calamity within 24 hours. In case of death due to natural calamity, there is a provision to provide assistance of rupees four lakh to the next of kin. Out of this, an assistance of Rs. 25,000 will be released within a period of 24 hours and the remaining amount within four days. Earlier it used to take more time to release this amount. This will certainly provide the help to the grief stricken at the earliest.

Under the efficient and sensitive leadership of Chief Minister Sukhvinder Singh Sukhu, the present state government in a span of just one month has proved that it is committed to provide succour to the neglected and weaker sections of the society so that they can live with dignity and self-respect. Apart from getting the state out of dire financial situation, the State Government is also fulfilling those promises which are the basis of trust between the government and the people. These social concerns of the government are infusing new enthusiasm in everyone.