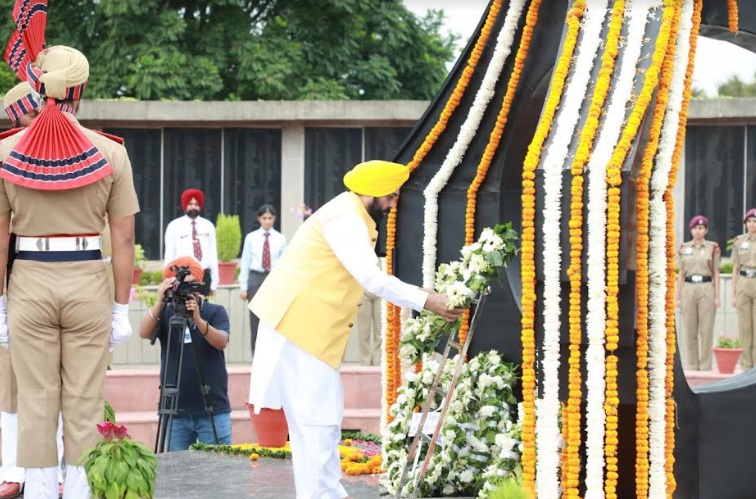 Punjab Chief Minister Bhagwant Mann today said that the supreme and unparallel sacrifice made by the valiant soldiers during the Kargil war will ever inspire our youth to serve the country selflessly with missionary zeal and patriotic fervour.

Interacting with the media persons on the sidelines of a function to mark the Kargil Vijay Diwas here at the War Memorial, the Chief Minister said that Kargil Vijay Diwas is a symbol of extraordinary valour of the Indian Armed forces as the Indian soldiers had scripted an unprecedented tale of sacrifice, heroism and valour during this war. He said that despite of all odds the Indian soldiers defeated the Pakistani armed forces that had intruded in Kargil, Drass and Batalik areas in July 1999. Bhagwant Mann said that matchless bravery and heroism exhibited by Indian soldiers hardly finds any parallel in the world history adding that it will ever inspire our youngsters to join the Indian forces and serve their motherland.

SEarlier, the Chief Minister laid a wreath at the War Memorial at the Bougainvillea Garden in Chandigarh and saluted the brave sons of Punjab who laid their lives during the Kargil Operations.

The Chief Minister said that the country will ever remain indebted to its valiant sons who safeguard the borders of the country even in scorching heat or freezing cold temperature. He said that recognising the immense contribution of the soldiers the state government has decided to give Rs 1 crore financial assistance to family of any soldier attaining martyrdom during call of duty. Bhagwant Mann said that this endeavour of the state government is a humble tribute to the selfless service being done by the soldiers.

Recalling the Kargil war of 1999, the Chief Minister said that during this war the entire country was united with patriotic fervor. Bhagwant Mann said that as an artist he along with his other colleagues had organised a fund raising show for the India Army. He said that entire collection from that show was handed over to the Indian Army at Patliala Cantt as a mark of respect.

Meanwhile during a brief interaction with the young NCC Cadets and Lady Cadets of Mai Bhago Armed Forces Preparatory Institute, the Chief Minister exhorted them to join the armed forces to uphold the country’s sovereignty and integrity. He said that they can also become role models for the youth to imbibe a spirit of patriotism and nationalism amongst them.