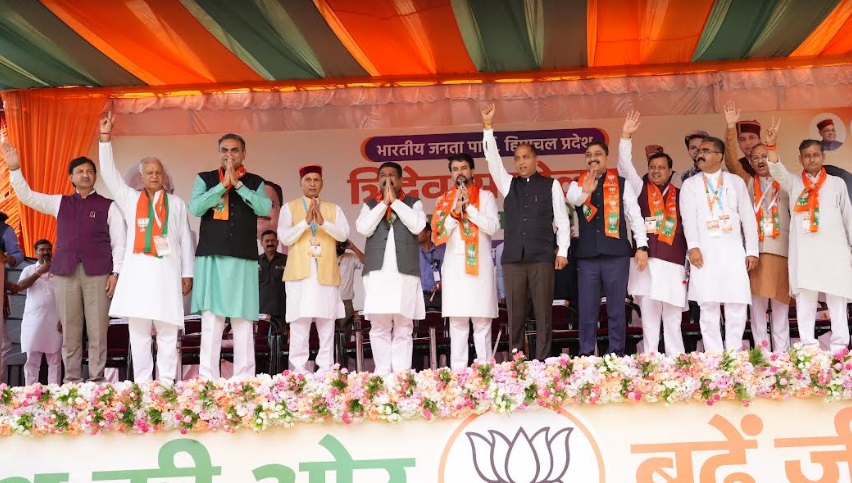 Take the policies and programmes of  Centre and  State Governments to the people : Jairam Thakur

While addressing the ‘Tridev Sammelan’ of Hamirpur Parliamentary area organized at Police Ground, Hamirpur in Hamirpur district today, Chief Minister Jai Ram Thakur urged the party workers to effectively take the policies and programmes of the Centre and the State Governments to the people and also effectively counter the false propaganda of the opposition.

Terming Prime Minister Narendra Modi as ‘World Leader’, the Chief Minister said that the Prime Minister not only successfully guided the Nation during the pandemic, but also motivated the scientists to develop indigenous vaccine for the people. He said that vaccinations of Measles, Japani Fever, Polio, Tetanus etc. took years after its invention to reach India, but under the able guidance Prime Minister Narendra Modi, corona vaccine was prepared within nine months of the first case of Covid-19. He said that apart from providing over 200 crore free vaccine to the people of the country vaccines were provided to several other countries of the World. He accused the Congress leaders of misguiding the people in the name of vaccination, but now the same leaders had now vaccinated themselves from this virus. Himachal Pradesh emerged as the first State in the country to achieve the target of cent per cent vaccination of eligible population with two doses of vaccine, he added.

Chief Minister said that the Congress Government always ignored interests of the State whereas on the other hand, the status of Special Category State was restored by the Prime Minister Narendra Modi.  He said that the 90:10 ratio for Central-State share for projects was also restored during the tenure of the BJP government. He said that the special industrial package for Himachal Pradesh was also provided by Atal Behari Vajpayee. He said that Atal Tunnel was also a gift of Prime Minister Narendra Modi to the people of the State. Projects such as IIM and AIIMS were sanctioned to the State during the tenure of the BJP Government and Medical Colleges at Chamba, Sirmour, Hamirpur, Mandi were also possible due to the BJP Government at the Centre, he added.

Jai Ram Thakur said that the present tenure of the State Government has been full of achievements and accomplishments. Mukhya Mantri Grihini Suvidha Yojna, Sahara Yojna, HIMCARE, Shagun Yojna etc, have been proving boon to the vulnerable and weaker sections of the society. He said that the State Government was spending over Rs 1300 crore for providing social security pensions as compared to Rs 400 crore spent by the Congress Government during their tenure.

Chief Minister said that going a step forward, the State Government has also decided to provide 125 units power free of cost to the electricity consumers of the State and 50 per cent concession on bus fare in HRTC buses to women of the State. The State Government has also decided to provide free water to domestic water consumers of the rural areas of the State, he added. He urged the party functionaries to work with greater commitment and dedication to ensure ‘Mission Repeat’ in the State, so that the pace of development goes uninterrupted.

Union Education, Skill Development and Entrepreneurship Minister Dharmendra Pradhan said that BJP today has emerged as the biggest political party of the world and credit of this goes to each and every party worker of the country. He also gave the credit of this growth of the BJP to the Prime Minister Narendra Modi and National BJP President Jagat Prakash Nadda. He said that power or the BJP was not a source of power, but it was a tool to serve the society, thus Prime Minister Narendra Modi always considers him as ‘Pradhan Sewak’ of the country.

Union Minister said that AGNIPATH was a visionary scheme which would provide an unique opportunity to the youth to serve the country and contribute towards Nation Building. He said that Himachal Pradesh is known as Veer Bhoomi and many sons of soil were giving their services in Armed Forces. This scheme would further encourage several youths of the State and Country to serve in Armed Forces.  He said that the Agnipath Yojna would prove a boon to the youth of the State to realize their dream of donning the Army dress.

Dharmendra Pradhan said that Agniveer Yojna would also enhance the availability of trained personnel to boost national security in times of external threats, internal threats and natural disasters and make the profile of Armed Forces more youthful and dynamic. He said that the scheme provides a holistic approach as it would also ensure adequate re-employment opportunities for those returning to society and would emerge as role models for other youths.   He urged the Tridevs to motivate people to support the BJP so that the pace of development goes uninterrupted in the State.

Union Information and Broadcasting and Youth Affairs & Sports Minister Anurag Singh Thakur said that covid-19 pandemic was a testing time for all in the World, but the BJP leadership and it workers rose to the occasion and helped those in need. He said that Prime Minister Narendra Modi brought a novice scheme to provide free ration to over 80 crore people of the country. He also lauded the efforts of the State Government in pioneering in cent percent vaccination of its eligible population in a record time. The eight years of the BJP led Government at the Centre were far better than the sixty years of the Congress and these eight years have witnessed unparallel development in all spheres of development, he said. He also counted several developmental initiatives taken by the Union and the State Governments on the occasion.

Member of Parliament and State BJP President Suresh Kashyap while welcoming the Union Ministers, Chief Minister and other dignitaries present on the occasion said that this was the third ‘Tridev Sammelan’ of the Party being organised in the State. He said that the State in general and Hamirpur parliamentary area in particular was blessed to have National BJP President Jagat Prakash Nadda and Union Information and Broadcasting Minister from this parliamentary area. He said that every worker of the party must work at the grass root level to ensure that the BJP again comes to power in the coming elections. He also thanked the Modi Government for launching ‘Agniveer Yojna’ for the youth of the State which would provide employment opportunities to over 46,000 youth every year. He also accused the opposition for misleading the youth for their political gains. He also urged the people of the State to ensure victory of the BJP in the State so that Jai Ram Thakur could again become the Chief Minister of the State.