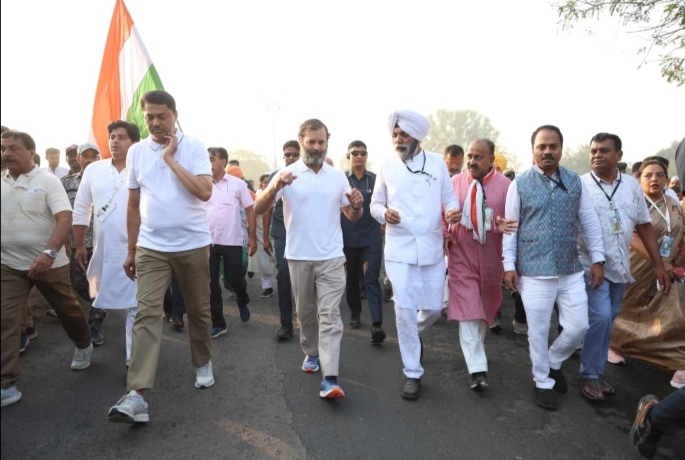 The Bharat Jodo Yatra to reach Punjab next month

CHANDIGARH, December 12:
The Bharat Jodo Yatra being led by Rahul Gandhi will enter Punjab next month and will stay in the state for about ten days, before entering the union territory of Jammu and Kashmir from Madhopur.
Addressing a press conference here today, PCC president Amarinder Singh Raja Warring along with party incharge for Punjab Harish Chaudhary and former Minister Vijay Inder Singla appealed to everyone to participate in the yatra irrespective of their party affiliations as the aim of the yatra was to save and protect the idea of India.
The party also released a toll free number for people in Punjab who want to participate in the yatra and get associated with it.
Warring said, there were two tentative routes planned for the yatra one of which will be finalised in the coming days.
While one route proposed is from Ambala via Kurali to Anandapur Sahab to Pathankot and then to Madhopur.
The second route will be from Shambu to Ludhiana, Jallandhar, Mukerian, Pathankot and Madhopur before it enters Jammu and Kashmir.
The PCC president said, the yatra had so far been going on for last 95 days and it will conclude in Kashmir on January 26.
He said that the yatra had drawn unprecedented response from the people of all sections. He said, the yatra had proved to be the best way to connect with the grassroots people and learn about their problems at their doorsteps.
Warring, Chaudhary and Singla appealed to Punjabis of all shades irrespective of their party affiliations to participate in the yatra as it was not a partisan yatra but being taken out in the interest of the country.
Warring said, preparations were in full swing to ensure maximum participation of people in it in Punjab and to make it a grand success here.