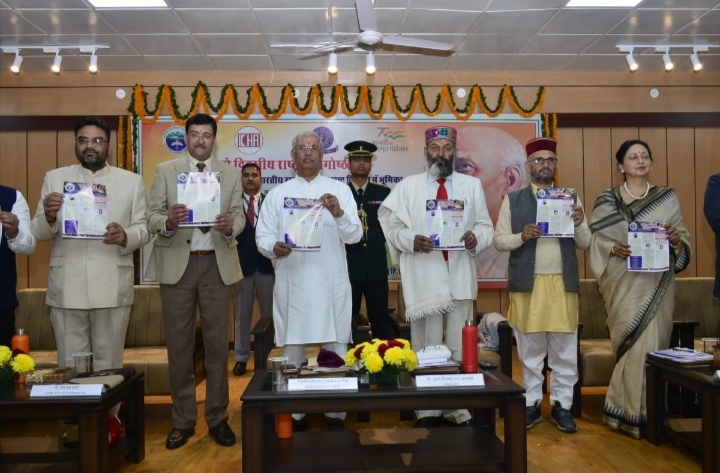 Governor Rajendra Vishwanath Arlekar stressed the need to restore the ideals, thoughts and contemplations of Sardar Vallabhbhai Patel in the interest of the country.

The Governor was addressing the National Seminar on “Role of Sardar Vallabhbhai Patel in Indian Politics and Nation Building” organized at Sardar Patel University in Mandi today as the Chief Guest.

Shri Arlekar said that there was a need to remember the life personality, thoughts and works of Sardar Patel in the present context. “He made a significant contribution in getting freedom to the country and fought throughout his life. His life was dedicated to national integration” he said.

The Governor said that the birth anniversary of Sardar Patel was celebrated as ‘Rashtriya Ekta Diwas‘. He said that Sardar Patel worked hard to unite the whole country and faced many difficulties and challenges. There is a need to go ahead with this feeling of nationalism, he added. “India is not a piece of land. The spirit of the nation is related to our nature and tradition, which we have never lost. Sardar Patel did the work of keeping this unity possible. His message is relevant even today and his thoughts need to be taken forward” said the Governor.

He said that this university was known as Sardar Patel University. Therefore, its responsibility increases even more to carry forward the thoughts, contemplations and message of Sardar Patel. He said that this institute has to move ahead on the path of development by taking these ideas. He expressed confidence that this concerted effort of the university together with everyone would establish it as an ideal university.

The Governor also administered the oath of national unity to all on the occasion.

Vice Chancellor of Atal Bihari Vajpayee University, Bilaspur, Chhattisgarh, Prof. Arun Diwakar Nath Bajpai while presiding over the program said that Sardar Vallabhbhai Patel not only united this nation but also contributed significantly in nation building. He said that we have given the place of mother to the nation. He said that India was a living soul, which we have attached to geography. With that nature and knowledge were linked. He said that Sardar Patel worked with the same spirit and did the work of boosting the morale of the people. He presented many examples of Sardar Patel’s sacrifice. He said that there was a need to adopt his life values. He stressed on fighting the internal evils and establishing our own language and culture.

Vice Chancellor of Sardar Patel University Mandi, Prof. Devdutt Sharma while welcoming the Governor said that the statue of Sardar Patel installed in the university would continue to inspire us all. The philosophyhe gave to society was relevant even today, he added. He said that this institute was moving ahead on the path of rapid development due to “institutional affinity”.

The special guest and Director of Thakur Ram Singh Itihas Shodh Sansthan, Neri Hamirpur Chet Ram Garg said that the society gets direction from the thoughts and contemplations of the great people of the country. He appreciated the efforts of the University for this endeavour. He said that efforts were being made to bring to the fore the works of the heroes whose sacrifices were put in the background, through a seminar organized on the occasion of Azadi Ka Amrit Mahotsav. He gave detailed information on the candor and thinking of Sardar Patel.

Dr. Surendra Soni, a keynote speaker and associate professor of Government Lohia Mahavidyalaya Churu of Bikaner University, said that Sardar Patel made the impossible possible and the work he did to unite the nation makes him great. This was the reason why he got absorbed in the hearts of the people, he added. He sacrificed for the country, he said.

The Pro Vice Chancellor of the Sardar Patel University Dr. Anupama Singh presented a vote of thanks.

District administration officers, Principals and other dignitaries were also present on the occasion.