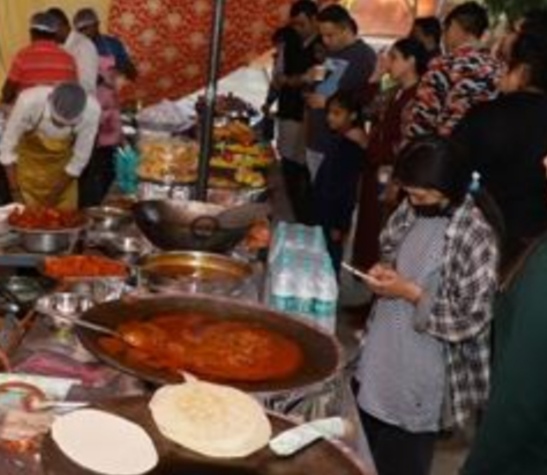 Himachal Pradesh, well known for its snowy hills and dales and its clean green environs, adding to its scenic beauty quotient. The lip-smacking cuisines of this quaint hill state make it a most sought after destination for visitors from home and abroad.

This was witnessed at the first-of-its-kind 9-day traditional food festival – ‘The Flavours of North India’ organised by the North Zone Cultural Centre (NZCC), Ministry of Culture, Government of India at Kalagram, Manimajra

The food stall put up by the State Tourism Department, turned out to be a favourite haunt for the most demanding foodies drawn from the far-end corners of the tricity and elsewhere, who relished the choicest cuisines served hot in a perfect homely atmosphere.

The most favourite delectable dish which the visiting guests fell headlong for was ‘Madra’, a delicacy from Chamba and Kangra districts. The dish consists of soaked chickpeas (chana), cloves, cinnamon, cardamoms, cumin, coriander powder and turmeric powder and yogurt. Madra is one of the prominent dishs on weddings or any small or big social or religious ceremonies.

Sidu is another popular dish of the land of snow, which is made of wheat flour stuffed with local vegetables that add to the taste of the dish. Sidu is the hot favourite with local and other visitors. This easy-to-prepare dish is available at restaurants or hotels serving Himachali foods in the state or elsewhere.

Babru is yet another delicacy, especially for the sweet tooth, which is more akin to Kachori popular in North India. Babru is flat bread with stuffing added to the kneaded dough. The crisp and the scrumptious dish leaves you asking for more.

The other dishes from the hill state of Himachal Pradesh were Daal Mash, Teliye Mash, sepu vadi, plain rice, also known in Pahadi dialect ‘Bhatt’ and so on in the vegetarian category served at the food stall put up at the venue. The non-veg category included ‘Khamod meat’ and Chicken ‘anardana’ served hot.

What the most demanding food lovers on the occasion missed on the plate was ‘Dhaam’, the most talked about dish of Himachal Pradesh The dish includes ‘dal’ (chana and urd cooked separately), rice, ‘Mahani’ amd Madra , ‘meetha’, which offers the taste of the divine. Any family, social, religious function or festivals sans ‘dham’ is drab as the Goa ‘curry’.

‘Dham’ is prepared and served by ‘botis’ (chefs) barefoot. Dham is served in ‘pattals’ and relished sitting on the ground over mats.