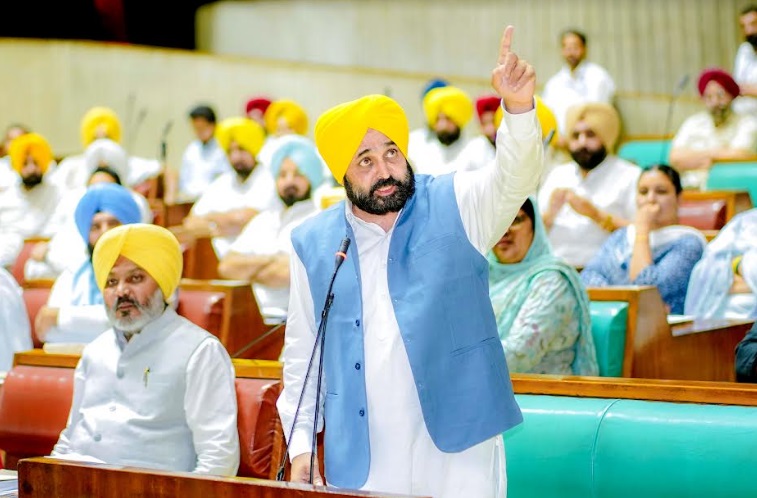 Will recover single penny from corrupt nexus in the state: Bhagwant Mann

Slamming the opposition for being neck deep in corruption, the Punjab Chief Minister Bhagwant Mann today said that every single penny plundered from the innocent people of state will be recovered from the nexus of corrupt politicians and bureaucrats.

“I vow on the floor of this august house that my government will never forgive the corrupt politicians for their sins against Punjab and Punjabis even if they join any big or small political party”, said the Chief Minister.

Winding up the debate on the Budget presented by Finance Minister Harpal Cheema, the Chief Minister said that any person who had looted the public money will have to pay for it and the state government will leave no stone unturned to put them behind the bars. Remembering Maharaja Ranjit Singh on his death anniversary, Bhagwant Mann said that state government will follow his footsteps to provide clean, transparent and effective administration to people. He said that all the benami properties and corrupt nexus behind it will be exposed before the people so that it acts as deterrent for others to indulge in such unlawful activities.

The Chief Minister unequivocally said that those who had plundered the wealth of state mercilessly were now approaching the courts to seek haven for their misdeeds. He said that those politicians who have not even been named by the government agencies for corruption are running pillar to post for seeking refuge, which reflects the fear in their minds about their own sins. Bhagwant Mann assured the house that no guilty will be spared and severest of severe action will be taken against them even if they join one or another affluent political party.

Hailing the pro-people budget prepared by the Finance Minister after due consultation with the people, the Chief Minister said that the opposition has been caught in a peculiar situation as they have been jostling hard to find any shortcoming in such a progressive budget. He said that the people of Punjab have given massive mandate to their team which will accomplish the herculean task that have not even been touched during the last 75 years. Bhagwant Mann said that for the first time core areas of Education and Health have been accorded top priority in this budget.

The Chief Minister bemoaned that the previous government have jeopardised the government education and health sector to give open space to private players for expanding their business. However, he said that this trend will be reversed in the coming years by his government through the upgradation of government infrastructure in both these key sectors. Bhagwant Mann said that those who have ruined the government schools and hospitals have been shown the door by people.

The Chief Minister also announced that one of his major poll guarantees in form of Rs 1000 financial assistance to Women will be implemented soon. He said that the state government is already in process of resource mobilisation and once it is completed this guarantee will be fulfilled soon. Bhagwant Mann said that his government is firmly committed for fulfilling all the guarantees made with the people of the state.

Training his guns against opposition for their slanderous propaganda on the choice of Rajya Sabha Members from state by AAP, the Chief Minister reminded the members of opposition that none of the Rajya Sabha member sent from the state has been rejected by the people. He said that this was contrary to earlier practice when the leaders who were trounced by the people in polls were sent to upper house of Parliament as ‘political refugees’. Bhagwant Mann said that those who are questioning their choice of Rajya Sabha candidates should remember that former Prime Minister Dr Manmohan Singh had remained Rajya Sabha member from Assam and then Rajasthan despite of fact that he belonged to Punjab.

Striking an emotional chord, the Chief Minister said that he had left his bright career as an actor to serve the poorest of poor in the state. Bhagwant Mann, while reiterating his pledge to serve the people of state with missionary zeal, said that he won’t rest until anyone in the state is striving for food. He said that one chance is enough for bringing the change in the system adding that this transformation will visible on ground very soon.

The Chief Minister said that this budget is roadmap for a progressive and vibrant Punjab as the people of state have ousted the political parties that used to play musical chairs of power to loot them after every five years. He said that his government has been given chance by people to serve them and they will work hard to fulfil their expectations. Bhagwant Mann asked the opposition to shun criticism for the sake of criticism and allow them to work for well being of Punjab.

The Chief Minister said that government is working tirelessly for Revenue generation and reduction in debt. He said that the state government will check pilferages of public money and utilise it for the welfare of people. Bhagwant Mann said that every single penny will be spent of development of state and prosperity of its people.

Listing the several e-governance initiatives taken by his government, the Chief Minister said that from the next Vidhan Sabha session, Punjab assembly will also get a new look. He said that from next session touch screens will be installed in the assembly thereby giving it a major facelift in form of e-assembly. Bhagwant Mann also announced that government will take every harsh step to control air, water and land pollution in the state.