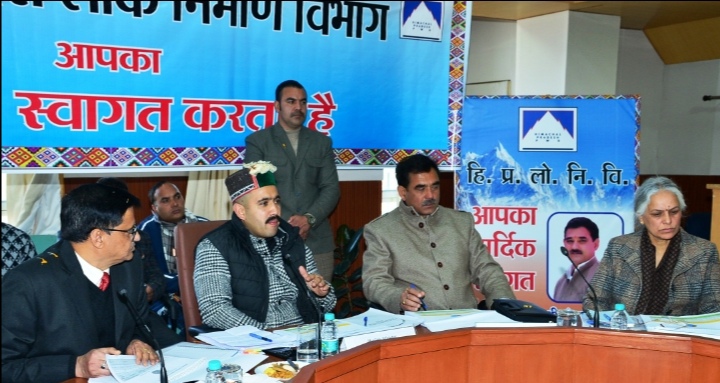 Won’t  compromise with  quality in construction of roads and buildings,Vikramaditya Singh

Public Works Minister, Vikramaditya Singh while presiding over the  first meeting review meeting of the PWD here today, directed for identifying the landslide zones en-route Shimla-Solan four-lane and to take measures so as to prevent damage to the highway while undertaking construction.

As maximum tourists use this highway, it becomes the duty of the department to ensure timely maintenance of the roads so that minimum inconvenience is caused to the commuters.  The minister asked the officers of the National Highway Authority of India, (NHAI) for completing the works undertaken by them in the State in a time bound manner.

Directions were issued to complete the construction work of the bridge at Ghandal, on Shimla-Matour, National Highway well in time as it caused lots of inconvenience to the people a year before or so. This road is the life line connecting lower belts of the State and the department must replace the existing Bailey bridge with new one on priority basis.

The Minister said that the State Government has made all necessary arrangements to clear the roads covered under snow and the necessary paraphernalia has been made available to the department to clear the these roads. Directions were given for identifications and maintenance of black Spots.

Vikramaditya assured that the government won’t tolerate the substandard work while construction of roads and buildings and the department would be provided modern equipments to check the quality of the construction work. He said that the people can also register their complaints and concerns regarding the poor quality of construction, and non-maintenance of roads through e-samadhan, ‘Meri Sadak’  and CP Gram portal.

Reviewing the works of the electric wing of the department, the Minister said that the buildings to be constructed by the department must be  equipped with Solar panels for electricity and water.